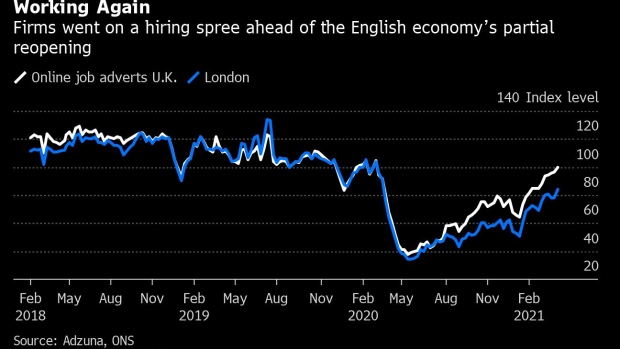 Commuters cross London Bridge in the City of London, U.K., on Monday, Feb. 15, 2021. The U.K. recorded 15 million vaccinations against the coronavirus, a milestone that is set to increase pressure on Prime Minister Boris Johnson to begin reopening the economy. Photographer: Jason Alden/Bloomberg , Bloomberg

The U.K. economy is building momentum, with real-time indicators suggesting consumers have started to splurge some of the cash they’ve saved now that the government has loosened lockdown rules.

Restaurant bookings and job postings surged to the highest since the start of the coronavirus pandemic, while road traffic and the number of people traveling to workplaces grew in recent weeks, data from Bloomberg Economics and government statistics show. Shops and bars were allowed to reopen on April 12, and most restrictions are set to lapse by June 21.

With more almost two thirds of adults in the U.K. immunized against the coronavirus, Prime Minister Boris Johnson is starting to relax advice on contaning the virus. Bank of England Governor Andrew Bailey anticipates a strong recovery as households unleash some of the 150 billion pounds ($207 billion) of savings accumulated over the past year.

Here are first indicators showing how last week’s unlocking is playing out:

The number of online job advertisements in the U.K. returned to levels seen before the pandemic for the first time, according to data through April 9 from the Adzuna jobs website published by the Office for National Statistics. That’s a positive sign after a year that saw Britain lag many of its global peers with business lacking the confidence take on new staff. There was a notable jump in catering and hospitality roles.

Postings on jobs website Indeed have recovered to about 16% below those seen at the start of February 2020. They have jumped by a fifth since the U.K. set out a roadmap to easing restrictions. Top gainers include sectors that are reopening such as sports, beauty and food services.

The proportion of furloughed workers that actually return to the labor market will be key to the consumer recovery, according to Fabrice Montagne, chief U.K. economist at Barclays Bank Plc. He’s cautious about predictions for the kind of “rip-roaring recovery” suggested by the BOE’s outgoing Chief Economist Andy Haldane.

“The third lockdown has actually been much less disruptive than we’d thought,’ Montagne said. “Hence the bounce will be automatically smaller. Sentiment is strong. The recovery will still happen, but in a more civilized way than pictured by Andy ‘Mr. Boom’ Haldane.”

“We expect the recovery to gain steam as restrictions ease further. There’s pent-up demand to come from many households who have involuntarily built up cash savings given the fewer opportunities to spend. We forecast the U.K. economy will expand by 5.5% in 2Q and 3% in 3Q after contracting by 2.2% in 1Q. That will leave output on course to reach its pre-virus level by Q1 2022.”

Last week’s opening of restaurants with a place to serve outdoors prompted a spike in bookings on the OpenTable reservations website. It expects a bigger jump when customers are allowed inside from May 17.

The restrictions on hospitality have been hard on the U.K.’s consumer-driven economy. The service sector is still 8.8% smaller than before the pandemic. More than half of the 693,000 drop in employees on payrolls was due to fewer jobs in food services since February 2020.

Road traffic is recovering slowly, according to a congestion index for London produced by location technology company TomTom. Morning rush-hours are yet to emerge, suggesting many who would normally commute remain working from home.

ONS data suggest people are becoming increasingly confident about returning to the workplace and mixing with others. In the week to April 11, 53% of working adults reported leaving home to go to a job. Almost six in 10 adults met up with someone outside their household, up from less than half a week earlier.

Demand for electricity is also picking up. It’s another sign that economic activity is gaining traction, putting behind the collapse that came with the first lockdown last year. Subsequent tightening of the rules had far smaller declines, since the manufacturing and construction sectors were able to adapt and remain open.

“You’ve got a more resilient economy under this lockdown, forward-looking indicators that are looking good, the relaxation of social restrictions, excess savings exceeding 120 billion pounds, and a successful, so far, vaccination effort,” said Philip Shaw, chief economist at Investec Bank Plc. “So far, so good.”