Chancellor of the Exchequer Rishi Sunak warned the U.K. is facing a significant recession after a report showed the economy shrank almost 6 per cent in March.

The sharp decline is only a small part of the damage of the coronavirus lockdown, which was in place for all of April and is set to endure in some form for months to come. The measures heaped misery on an already tepid economy, with the Bank of England foreseeing a staggering 25 per cent contraction this quarter as part of the deepest slump in more than three centuries.

There was also a chilling warning that many more lives could be lost if Britain experiences a protracted L-shaped recession that increases poverty. The U.K. already has the second highest number of deaths from the virus worldwide.

The GDP figures highlight the monumental task the government faces as it begins to take small steps toward easing the lockdown. It’s extended an aid program for workers, and the central bank will probably pump even more stimulus into the economy to keep the motor running. Investors have already stepped up bets on more monetary easing.

The U.K. lockdown was imposed on March 23, meaning only about a week of the first quarter was affected. That was still enough for a 2 per cent contraction in the three months, the worst since the global financial crisis more than a decade ago.

The damage in March was widespread, but the huge services sector took the brunt. Travel and tourism plunged 50 per cent, while accommodation fell by 46 per cent and air transport by 44 per cent. Manufacturing and construction also contracted.

The economy has now failed to grow for three of the previous four quarters, after months of political and Brexit uncertainty meant the U.K. entered the latest crisis on a weak footing.

In a sign of the scale of the latest challenge, Sunak on Tuesday extended wage subsidies for furloughed workers until the end of October at a cost of billions of pounds to the public purse.

“The first quarter was that bad based on just a few days of the impact of coronavirus in March, so yes it is now very likely that the U.K. is facing a significant recession,” Sunak said in an interview with Sky News on Wednesday.

The Telegraph newspaper reported a leaked Treasury assessment about the cost of the crisis to the government. The “base case” saw the deficit, forecast at 55 billion pounds (US$68 billion) before the pandemic, rise to 337 billion pounds. The “worst case” scenario saw it hit 516 billion pounds.

A Treasury spokesman declined to comment on the leaked documents, dismissing the story as “speculation.”

Anneliese Dodds, the opposition Labour Party’s finance spokeswoman, told Bloomberg Television that the “substantial debt” will be “the norm” in the U.K., as in many developed countries. She said that will have to be reduced “in the long-run,” but cautioned against spending cuts.

“If you cut back too radically too quickly, that’s going to impede that recovery and make the economy grow more slowly than necessarily,” she said. 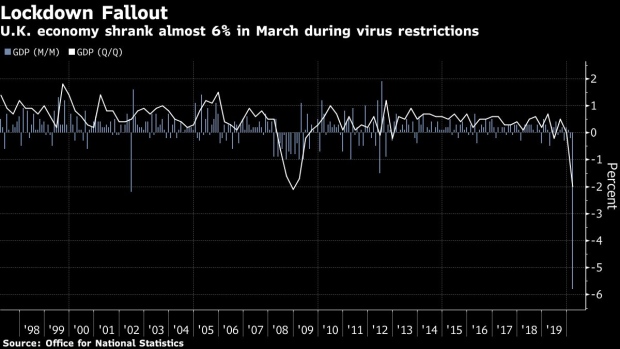 “With the risks to the outlook firmly to the downside, we still expect the Bank of England to ease again next month.”

The BOE, which has cut interest rates to 0.1 per cent and restarted bond purchases, has indicated more easing could come as soon as next month. It expects a strong rebound in 2021 after a 14 per cent slump this year but many analysts regard such a scenario as overly optimistic.

“It’s now very hard to imagine a rapid ‘V-shape’ recovery, and we don’t expect a return to pre-virus levels of activity until 2022 at the earliest,” said James Smith, an economist at ING.

Consumer spending, the engine of the economy, fell 1.7 per cent in the first quarter, the largest drop since the financial crisis, and it’s set to fall further.

“An L shape over a long period of time could lead to a significant number of deaths as a result of people being pushed into poverty or into long-term unemployment,” he told a panel of lawmakers Wednesday. “And we know that people in the lowest deciles of income have higher mortality rates, sadly, in our country, and if you increase that you are likely to see an increase in deaths.”

--With assistance from Joshua Robinson, Francine Lacqua and Andrew Atkinson.