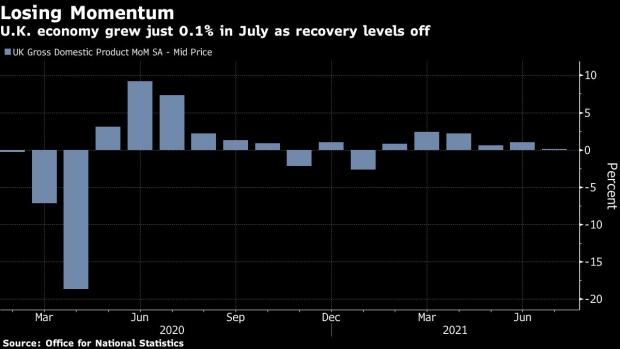 (Bloomberg) -- The U.K. economy barely grew in July, suggesting the recovery from the coronavirus recession is rapidly levelling off.

Gross domestic product expanded just 0.1%  -- a tenth of the pace posted in June, the Office for National Statistics said Friday. Economists surveyed by Bloomberg had expected a 0.5% expansion.

The figures left output 2.1% below the level in February 2020, before the pandemic struck.

Services and manufacturing stagnated and construction output declined. It was the weakest month for the economy since January, when a third lockdown caused output to slump.

The data herald a return to more normal growth rates after pent-up demand following the lifting of restrictions in the spring saw the economy surge by almost 5% during the second quarter.

The loss of momentum in July, when the economy completed its reopening, may partly reflect concerns about the spread of the delta variant and a requirement for hundreds of thousands of people to stay at home after being pinged by a National Health Service contact-tracing app.

Moreover, many businesses are struggling with pandemic-induced supply-chain disruptions and labor shortages, which are expected to weigh on growth for some time.

More difficulties lie ahead, with several support programs put in place to help people through the crisis due to come to an end this month. They include the government’s flagship furlough plan, which was still supporting around 1.6 million people last month, and a temporary uplift to welfare benefits.

Meanwhile, workers and businesses face higher payroll taxes from April under an annual 12 billion-pound ($17 billion) plan announced this week to boost funding for the National Health Service and social care.