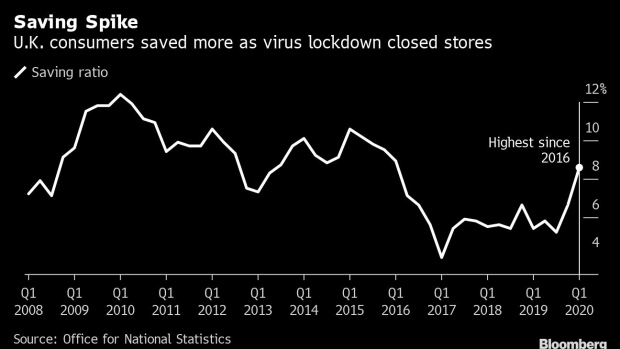 Pedestrians pass a police officer standing in a raised platform beneath British Union flags, also known as Union Jacks, and Thank You flags, on Oxford Street in central London, U.K., on Wednesday, June 24, 2020. Getting people back into stores after a 12-week pause is crucial for Britain's 400 billion-pound ($502 billion) retail industry, and for the country at large, which relies on consumer spending for about 60% of gross domestic product. , Bloomberg

(Bloomberg) -- The U.K. is experiencing a stronger recovery than Bank of England policy makers were expecting, according to the central bank’s chief economist Andy Haldane.

Officials also need to be wary of the limits of monetary policy in combating the downturn, he said in a webinar on Tuesday. Haldane was the only member of the bank’s Monetary Policy Committee to vote against an expansion of its bond-buying program earlier this month.

Growth likely fell by 20% compared to its pre-Covid peak in the second quarter, 7 points less than in the BOE’s last official scenario in May, Haldane said. Consumer spending appears to be picking up, and if higher levels continue, output could be put onto a different path than the bank’s previous estimates.

“Risks to the economy remain considerable and two-sided,” he said. “Although these risks are in my view slightly more evenly balanced than in May, they remain skewed to the downside.”

The U.K. contracted more than projected in the first quarter as consumers saved more and spent less, the statistics office reported earlier Tuesday.

The most prominent downside risk is the labor market, Haldane said. As the government’s furlough program tapers in August, there’s a risk that workers aren’t hired back by employers, which could create a negative feedback loop and result in lower spending. Still, if companies are willing to take back furloughed workers, that would raise household incomes, confidence and spending, he said.

Since the May forecasting round, “positive news on demand has, in my opinion, more than counterbalanced the rise in downside risks to employment,” he said.

The first line of defense against the crisis is fiscal policy, and Haldane said there’s little monetary policy can do to fix sectoral shifts in the economy or structurally high unemployment.

“Before the Covid crisis, I expressed concerns about the growing ‘dependency culture’ around monetary policy,” he said. Noting that central banks shouldn’t be over-burdened, “recent events have done nothing to allay those concerns.”