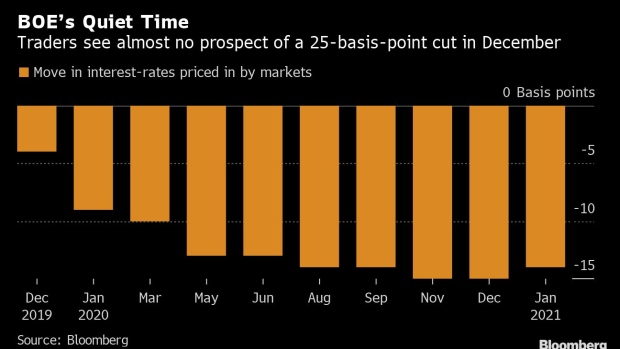 Bank of England policy makers are being forced to keep stumm just as the outlook is changing, restricting their ability to reinforce signals that lower interest rates could be imminent.

The U.K.’s Dec. 12 election will hamper any attempts to prepare markets for a move at the BOE’s next decision just before Christmas. Officials are now in the customary pre-election quiet period -- where communication is restricted on the grounds of political impartiality.

On Thursday, two officials surprisingly voted for an immediate cut. The committee as a whole warned that if the global slowdown worsens, or the Brexit situation deteriorates, then “monetary policy may need to reinforce the expected recovery” -- a shift from previous guidance that hikes are more likely than not over the next few years.

Neither the majority nor the two dissenters, Michael Saunders or Jonathan Haskel, will be able to explain the reasons behind their vote any time soon. Without the prospect of speeches or interviews from policy makers, investors will be left on their own to judge whether the global slowdown or Brexit buttress the case for more stimulus.

That will be especially tricky after the election -- which may significantly alter the outlook for fiscal policy and how the departure from the European Union plays out.

Economists are skeptical that officials will be prepared to cut rates in December without having first laying the groundwork.

“A lack of communication before the December MPC meeting will make communicating a shift in policy difficult,” said Sanjay Raja, a U.K. economist at Deutsche Bank AG in London. “Given the split vote, the changing BOE stance warrants more not less communication. This is one reason why we maintain that a January cut is more plausible than a December cut.”

Postponing the move would leave the BOE further behind international peers in easing policy. The U.S. Federal Reserve has lowered interest rates three times this year, while the European Central Bank restarted an extensive stimulus plan.

Royal Bank of Canada economists Peter Schaffrik and Cathal Kennedy said that “it won’t be possible for MPC members to signal any shift in their positions or thinking in advance of the meeting, which is why, absent any major change in the interim, it is likely to remain on hold at that final meeting of this year.”

Investors also seem to share that view. The reaction in the pound to the vote split was limited, while money markets see just a 15% chance of a cut in December, rising to about 40% the following month.

Still, another surprise in December isn’t impossible. Haskel’s shock vote for a cut on Thursday showed that some officials are content to push for a change in rates without first sending hints with their public comments.

The pre-election quiet period -- formerly known as purdah -- has also forced the BOE to delay the publication of its annual stress tests for banks. The central bank will now release the results and the Financial Stability Report, previously slated for Dec. 10, on Dec. 16.

--With assistance from James Hirai.

To contact the editors responsible for this story: Paul Gordon at pgordon6@bloomberg.net, Brian Swint, Andrew Atkinson