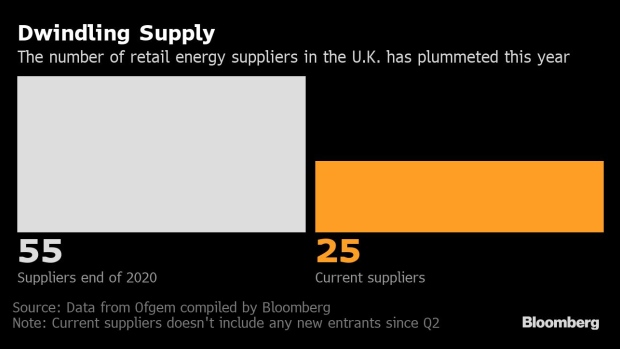 U.K. energy companies will be repaid the cost of taking on the customers of bankrupt suppliers sooner than expected, adding further upward pressure to household bills from April.

Paying for the cost of absorbing millions of customers without being reimbursed for as long as 18 months was one of the key gripes of energy suppliers still left in the market. Regulator Ofgem has brought forward the date suppliers can start to recover these claims via bills to April, but that means higher costs for consumers already facing a hike in the nation’s price cap.

“We recognize that this is a difficult time for consumers who will face higher energy costs from April 1 when the price cap increases to reflect the current high wholesale price,” Ofgem’s director of retail Neil Lawrence said in a letter published Wednesday. “We have designed this faster levy claim process to protect both consumers directly affected by supplier insolvencies and all consumers who will have to pay these costs.”

The surge in wholesale prices to levels almost four times higher than usual for this time of year has wreaked havoc on the energy retail sector, which must adhere to regulated price caps for some customers. Since the start of August, 24 suppliers have collapsed, the latest announcement coming from Zog Energy Ltd on Wednesday. For households, higher energy bills will come at a time when inflation is rising making everything from food to petrol more expensive.

The cost associated with the collapse of these suppliers stands at about 3.2 billion pounds ($4.3 billion), according to an analysis by Investec Bank Plc. It’s this tab that will start to be reclaimed from April, rather than from October as previously expected.

The so-called supplier of last resort, or SoLR, companies need to submit claims by Dec. 6 and Ofgem will decide whether to approve them by Dec. 17. This will enable networks to reflect levy claims in their charges from April and repay SoLRs from May.

Since these costs won’t be spread out only among the customers who switched, the “supplier exits via SOLR can lead to higher costs for all consumers,” according to consultant Cornwall Insight.

It’s still likely to take 12 months for the full costs to be recovered, Ofgem said.

“Changes that would allow costs to be recovered in less than 12 months would likely have an even greater impact on consumer bills, network companies and other suppliers and so would require more detailed analysis,” the regulator said.

The accelerated process is temporary and to reflect “extreme market conditions,” it said.