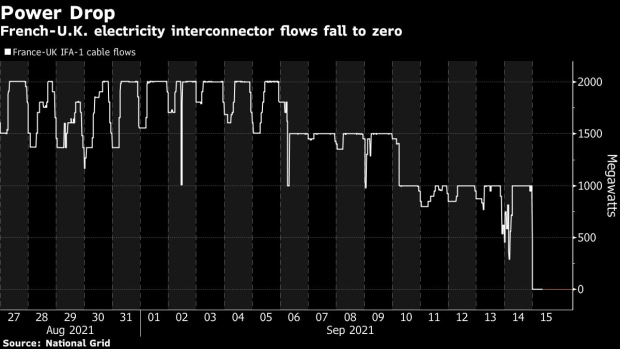 Smoke from a large fire at the National Grid Plc's IFA interconnector site in Sellindge, U.K., on Wednesday, Sept. 15, 2021. The fire at the key electricity converter station in the U.K., has shut down a major cable that brings power from France to Britain. Photographer: Edward Evans/Bloomberg , Bloomberg

(Bloomberg) -- The U.K.’s energy crisis worsened after a large fire shut down a major power cable bringing electricity from France.

Gas and power prices jumped as the U.K. grid operator said the cable will be out for at least a month. Firefighters battling the blaze at a converter station in the U.K. since the middle of the night said it will take several more hours to put out.

The timing couldn’t be worse: Britain is already struggling with shortages, with gas and power prices breaking records day after day. The energy crunch is fueling concerns about inflation and a potential hit to businesses just as the economy emerges from the worst impact of the pandemic.

“This is a major event,” said Phil Hewitt, executive director at Enappsys Ltd., a consultant.

Britain is a net importer of power, with France its biggest supplier via two cables that run across the English Channel. One of those was knocked out by the fire, according to National Grid, and it will be out of action until at least Oct. 13.

The fire started in the converter hall and has spread through the building, National Grid said. The cable that’s down -- known as IFA-1 cable -- has capacity of 2,000 megawatts. A second cable with capacity of 1,000 megawatts -- is currently unaffected. The cause is still being investigated. A person familiar with the matter said the fire has caused severe damage.

“We could start seeing problems from 5 o’clock,” Edwards said. “If anything goes wrong we might not have anything left.”

The U.K.’s crunch is part of broader energy crisis in Europe, which has prompted governments to start taking action to ease the impact on consumers. Spain, Greece, France and Italy are all considering or enacting measures as households brace for a surge in bills.

U.K. gas futures surged as much as 18% on Wednesday to a record 194.94 pence a therm. Day-ahead power reached a record 422.46 pounds a megawatt-hour in an auction on Epex Spot SE.

A broader crunch is hitting Europe too, with the continent running out of time to refill gas storage sites ahead of the winter. Flows from top suppliers Russia and Norway have been limited, and there’s a competition with Asia to snag liquefied natural gas cargoes. Traders betting that the controversial Nord Stream 2 pipeline linking Russia to Germany would start in the fourth quarter are likely to be disappointed.

Windless weather has also left the U.K. without a major source of power -- increasing reliance on gas. Nuclear outages are adding to the shortage and coal sites have been decommissioned, removing backup capacity. Gas prices are also surging as a tropical storm in the U.S. threatens to disrupt LNG exports.

“The delays to Nord Stream 2 into 2022 are all too real, and to add insult to injury the poor renewable generation outlook is further exacerbated by supply disruptions to the key France-UK power interconnector,”said Tim Partridge, head of energy trading at DB Group. “The impending tropical storm in the U.S. around key oil and gas facilities is just the cherry on the cake.”

The surge in the cost of carbon emissions -- traded on exchanges in Europe and the U.K. -- is also pushing up the cost of producing electricity. There’s some concern the crisis could cause a backlash against measures aimed at converting economies to greener fuels.

National Grid sounded an early warning in July that the U.K.’s ability to meet peak demand would be smaller this year. In one scenario they modeled -- with one interconnector knocked out and high demand -- margins would be the tightest in years.

“With margins already tight for this winter,” the outage will “tighten those margins further, resulting in higher U.K. power prices,” said Adam Lewis, partner at Hartree Partners LP. “This is also likely to tighten the U.K. gas markets as the U.K. will need to substitute imports with its own generation.”

At the height of the incident, 12 fire engines plus other specialist vehicles were fighting the fire using compressed air foam to prevent the fire from spreading to other nearby buildings. The fire also shut down the Eurostar track temporarily early on Wednesday, causing delays to the service.