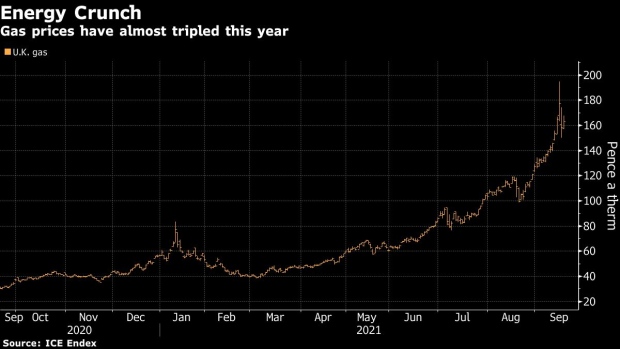 Electricity transmission pylons near Dungeness Power station, operated by Electricite de France SA (EDF), in Dungeness, U.K., on Monday, Oct. 26, 2020. The U.K.'s power supply buffer is set to shrink this winter compared to last year due to outages at power plants and the unexpected closure of two of Calon Energy Ltd.'s gas-fired stations after the company went into administration. Photographer: Chris Ratcliffe/Bloomberg , Bloomberg

(Bloomberg) -- Energy companies and the U.K. government will hold a third day of crisis talks as a surge in gas and electricity prices threatens to put more suppliers out of business and squeeze consumers.

Business Secretary Kwasi Kwarteng warned Sunday that with suppliers under pressure, the government has a plan to put a special administrator in place in the event of companies’ failure. He’s convened a discussion with the energy industry on Monday to chart a path forward.

The meeting comes after talks over the weekend with companies including Centrica Plc, Britain’s biggest supplier, and EDF Energy, as well as two gatherings with U.K. energy regulator Ofgem.

Rising energy bills are giving rise to concerns about inflation as well as potential hardship for millions of lower-income Britons over the winter. Seven energy suppliers in the U.K. have failed this year and there are concerns more will do so as prices rise, exposing unhedged companies that have sold energy to customers at lower levels than they can now buy in the market.

Gas prices in the U.K. have almost tripled this year due to a supply crunch, forcing some industrial users to curb production and sending ripples through the food-supply chain.

“Ofgem continues to work closely with government and industry to ensure consumers continue to be protected while global gas prices are high and will speak further on these issues at the industry round table tomorrow,” the regulator said in a statement on Sunday.

The energy industry is demanding a multi-billion-pound emergency package from the government, including a mechanism to absorb potentially unprofitable customers from smaller competitors that have failed, the Financial Times reported on Sunday. A decision hasn’t yet been made, the paper said.

The government and Ofgem plan to create a special administrator to step in if there are no takers for the customers of a failed company, Kwarteng said in a tweeted statement.

A supplier would have to buy power and gas for any new customers in the wholesale market, where prices are near record highs.

“Some energy companies are facing pressure,” Kwarteng tweeted. “Ofgem has robust measures in place to ensure that customers do not need to worry, their needs are met, and their gas and electricity supply will continue uninterrupted if a supplier fails.”

The cost is typically pooled among energy companies and then passed on to consumers when an energy supplier goes under. There are also contributions toward renewables subsidies and security of supply measures that all suppliers have to pay. These unpaid bills will be shared around the companies still left.

Ofgem chooses a new supplier for customers following a competitive bidding process but they can leave at any point. The regulator advises people to ask the new company to put them on their cheapest tariff or shop around and find a new deal.

For example, EDF was chosen to take on the 220,000 household customers of failed Utility Point on Sept. 17.

“If the current situation continues then there will be a risk the winter becomes one where the market goes back in time, and a monopoly returns leaving just a handful of energy suppliers,” said Steven Redmayne, chief operating officer of Green Supplier Ltd, a small supplier in the northeast of England. “This will reduce competition and harm customers’ choices and increasing the price they pay.”

Kwarteng on Sunday met with Tony Will, chief executive officer of CF Industries Holdings Inc. after the fertilizer company said it was shutting two plants in the U.K. because of high gas prices.

CF Industries makes carbon dioxide (C02) as a byproduct, which  has multiple uses in food packaging and transport, as well as in slaughterhouses and in the medical industry.

“We discussed the pressures the business is facing and explored possible ways forward to secure vital supplies, including to our food and energy industries,” Kwarteng said.