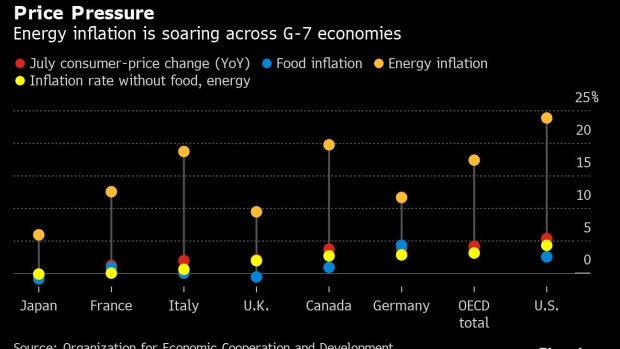 Electricity transmission pylons near Dungeness Power station, operated by Electricite de France SA (EDF), in Dungeness, U.K., on Monday, Oct. 26, 2020. The U.K.'s power supply buffer is set to shrink this winter compared to last year due to outages at power plants and the unexpected closure of two of Calon Energy Ltd.'s gas-fired stations after the company went into administration. Photographer: Chris Ratcliffe/Bloomberg , Bloomberg

(Bloomberg) -- U.K. energy companies are seeking a massive government bailout as a surge in gas and electricity prices threatens to push suppliers out of business.

The U.K. government is set for a third day of emergency talks with the industry on Monday after Business Secretary Kwasi Kwarteng said small suppliers were under “pressure.” Now large suppliers are seeking a rescue plan to help them handle the cost of taking on the customers of smaller suppliers that may fail, according to two people familiar with the situation.

In a first instance, if a company goes under, another supplier will be found. If that’s not possible, the government will appoint an administrator, Kwarteng said. The concern, according to one person familiar with the situation, is if several fail at once. That’s why large companies are proposing government help.

As gas prices have almost tripled amid a supply crunch, seven U.K. suppliers have already failed this year. Unhedged companies have sold energy to customers at lower levels than they can now buy in the market, and regulated price caps mean they can’t pass on the cost to consumers -- at least for now. But those caps will be revised early next year, potentially bringing inflation and fuel poverty to lower-income Britons already struggling as the economy emerges from the pandemic.

Kwarteng will meet energy industry bosses again on Monday after emergency talks through the weekend with companies including Centrica Plc and EDF Energy, as well as regulator Ofgem.

“The Business Secretary is in close contact with the energy industry on the impact of high global gas prices, having met senior figures today and yesterday, and will speak further on these issues at an industry roundtable planned for tomorrow,” a government spokesman said.

Across Europe, governments are taking steps to curb the impact of high prices on households. Italy is set to spend around 3.5 billion euros ($4.1 billion) protecting consumers, while Spain, France and Greece are acting to stem the hit to their economies.

As government talks continued in the U.K., the country’s sixth biggest supplier, Bulb Energy Ltd, was in negotiations with Lazard Group LLC about seeking new sources of financing, according to a person familiar with the discussions.

“From time to time we explore various opportunities to fund our business plans,” Bulb said in a statement. “Like everyone in the industry, we’re monitoring wholesale prices and their impact on our business.”

Kwarteng said the regulator and government would make sure consumers weren’t hit by supply outages. “Ofgem has robust measures in place to ensure that customers do not need to worry, their needs are met, and their gas and electricity supply will continue uninterrupted if a supplier fails.”

In these situations, the cost is typically pooled among energy companies and then passed on to consumers when an energy supplier goes under. There are also contributions toward renewables subsidies and security of supply measures that all suppliers have to pay. These unpaid bills will be shared around the companies still standing.

Ofgem chooses a new supplier for customers following a competitive bidding process but they can leave at any point. The regulator advises people to ask the new company to put them on their cheapest tariff or shop around and find a new deal.

In the current market, taking on new customers and having to buy power and gas to supply them, would probably be loss-making.

The repercussions of the energy crisis on the broader economy are already being felt. Online grocer Ocado Group Plc stopped supplying frozen products to customers last week and the meat industry warned that businesses could “grind to a halt” within two weeks -- adding to supply chain kinks the industry is already suffering.

The food industry has been hit by the knock-on effect on the production of carbon dioxide -- a gas used both to chill food and in the slaughter of animals.