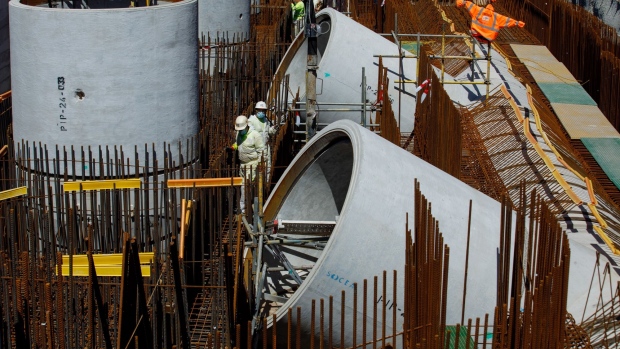 (Bloomberg) -- The British government is exploring ways to remove China’s state-owned nuclear energy company, China General Nuclear Corp., from all future power projects in the U.K., in a further sign that relations between the countries are deteriorating.

Projects potentially at risk include the 20 billion-pound ($27.5 billion) Sizewell C nuclear power station in Suffolk and the proposed Bradwell-on-Sea development in neighboring Essex, according to a person familiar with the matter, speaking on condition of anonymity.

CGN is also a 33% investor in the Hinkley Point C facility, currently under construction in Somerset and one of the biggest infrastructure projects in the country.

The move underlines how Boris Johnson’s administration is hardening its stance toward Beijing. Johnson has blocked Huawei Technologies from participation in the rollout of Britain’s 5G wireless network and earlier this month Britain’s national security adviser opened a probe into the takeover of the country’s biggest chip plant by Chinese-owned Nexperia NV.

“All nuclear projects in the U.K. are conducted under robust and independent regulation to meet the U.K.’s rigorous legal, regulatory and national security requirements, ensuring our interests are protected,” a spokesperson for the Department for Business, Energy and Industrial Strategy said in a statement, when asked about the stance. “Nuclear power has an important role to play in the U.K.’s low-carbon energy future, as we work towards our world-leading target to eliminate our contribution to climate change by 2050.”

News of the CGN plans was first reported by the Financial Times newspaper late Sunday.

Members of Johnson’s Conservative Party have repeatedly expressed concern about China’s increasing involvement in critical aspects of U.K. infrastructure and in its major educational establishments such as Cambridge University. Former party leader Iain Duncan Smith has said that Britain should use its new status post-Brexit to put human rights at the heart of any trade deals.

Nuclear power is set to play a key role in the government’s commitment to slash greenhouse gas emissions to net zero by 2050. Although a major investment in offshore wind farms is set to help meet that goal, the country’s transmission network will rely on nuclear as a backup -- nuclear stations are designed to generate energy around the clock, whereas wind power is less predictable.