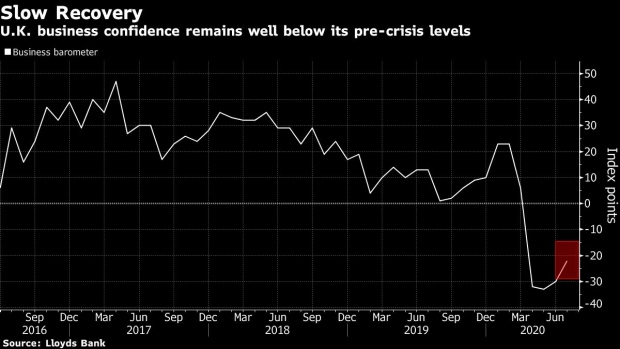 (Bloomberg) -- The U.K. faces significant numbers of redundancies in coming months, even as millions of furloughed employees have already returned to work, according to the Resolution Foundation.

Social industries such as hospitality and leisure -- where four in 10 workers are still having their wages supported by the government -- are most at risk, the think tank said in a report published Saturday. Its research suggests that over half of furloughed workers have returned to work, either fully or part-time, and it criticized government figures for overstating the size of the program.

The findings come the same day that Chancellor Rishi Sunak starts to wind down the plan, meaning employers begin to bear some of the costs for their employees. The government has also paused its staged opening up of the economy, highlighting the tension between attempts to stamp out the virus while getting commerce moving again.

High-risk venues such as casinos, bowling alleys and ice rinks will now have to wait at least another two weeks to reopen and face coverings will become compulsory in more indoor settings, including museums and cinemas.

“Workers face a heightened risk of unemployment as the Job Retention Scheme starts to be phased out from today,” said Dan Tomlinson, senior economist at Resolution. “The Chancellor should reduce this risk by phasing out support for these hardest hit sectors more slowly.”

The night time economy, including night clubs and music venues, will have to pay about 285 million pounds ($375 million) to keep 520,000 workers on furlough for the next three months, according to the analysis. The cost to the exhibition and trade shows sector would be 22 million pounds, it said.

Labour has called for an extension of wage support to both the worst-hit sectors and for areas forced back into localized lockdown to quell the spread of coronavirus. Businesses also expressed concern about the tapering of support.

“One in five small firms have been forced to let staff go over the last three months,” Federation of Small Businesses National Chairman Mike Cherry said in a statement. “Even with critical emergency measures in place, jobs are sadly being lost in the here and now. As we look to the autumn, it’s clear that we cannot afford to pull up the business support drawbridge any time soon.”