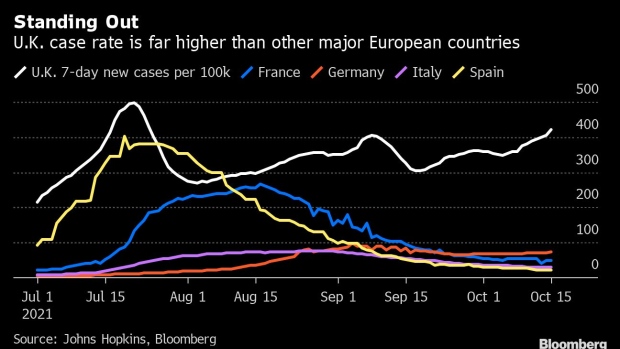 (Bloomberg) -- Surging Covid cases in the U.K. have left the country behind the rest of Europe with former U.S. Food and Drug Administration Commissioner Scott Gottlieb calling for urgent research into a mutation known as delta plus.

Britain, faster to reopen and relax restrictions than other European countries, reported the highest daily jump in new cases on Sunday since mid-July. Weekly deaths from the virus topped 800 for each of the past six weeks, higher than in other major western European nations, according to Bloomberg’s tracker.

The U.K. also has lagged in rolling out the vaccines to adolescents amid concerns that some side effects undermined the net benefit of the shots given children are less likely to become seriously ill. The delay meant most older children weren’t offered a vaccine until the school year had started. Prevalence of Covid-19 is growing among those aged 17 and younger, the latest React-1 study led by Imperial College London found last week. The reproduction rate in that age group was 1.18, meaning that on average every 10 young people infected are passing it on to about 12 others.

The delta plus strain Gottlieb highlighted includes the K417N mutation, which has also stoked concern because that’s also harbored by the beta variant that’s associated with an increased risk of reinfection.

“We need urgent research to figure out if this delta plus is more transmissible, has partial immune evasion,” he said in a tweet. “There’s no clear indication that it’s considerably more transmissible, but we should work to more quickly characterize these and other new variants.”

U.K. researchers said in late June that there’s no evidence yet to suggest the additional mutation is more worrisome. A German paper out earlier this month found while both delta and delta plus infect lung cells more efficiently than the original coronavirus strain, delta plus doesn’t appear to be significantly more dangerous than delta.

Gottlieb, who serves on Pfizer’s board of directors, led the FDA from 2017 to 2019. He has been promoting his new book, “Uncontrolled Spread: Why Covid-19 Crushed Us and How We Can Defeat the Next Pandemic.”

In England, the percentage of people testing positive continued to increase in the week ending Oct. 9, with an estimated 890,000 people having Covid-19, or about 1 in 60, according to the Office for National Statistics.

To date, the U.K. has recorded almost 140,000 Covid-related fatalities.

“At the moment the U.K. has a higher level of Covid-19 than most other comparable countries, this is seen not just in positive tests but in hospital admissions and deaths,” Jim Naismith, a professor at the University of Oxford, wrote in a statement published by the Science Media Centre Oct. 15. Each death “represents a tragedy,” he said.

(Updates with chart before third paragraph and additional details throughout)