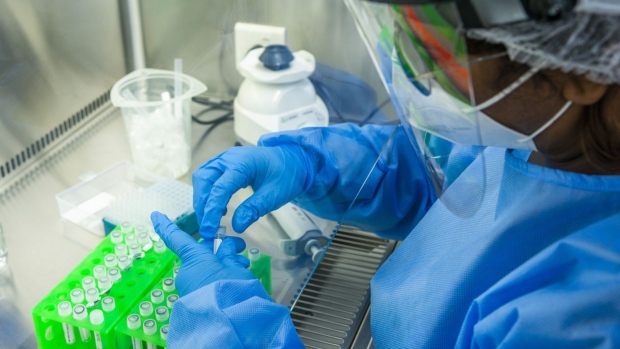 A lab technician tests material inside a fume cabinet during Covid-19 polymerase chain reaction (PCR) test processing at a laboratory in the Dunkeld suburb of Johannesburg, South Africa, on Wednesday, Feb. 10, 2021. Scientists are concerned the South Africa coronavirus strain could be far more widespread in the U.K. than test results show, threatening plans to start lifting lockdown once vaccines have been deployed. Photographer: Waldo Swiegers/Bloomberg , Bloomberg

“The two cases are linked and there is a connection with travel to southern Africa,” Javid said on Twitter.

The U.K. will add four more southern African countries -- Malawi, Mozambique, Zambia and Angola -- to its travel “red list” effective 4 a.m. local time on Sunday, he said. People returning from red-list countries face a mandatory 10-day quarantine at a managed hotel at their own expense.

The two individuals and their households -- one in Chelmsford and one in Nottingham -- are self-isolating, and contact tracing is ongoing, according to the U.K. Health Security Agency. All involved will be re-tested.

Ten African countries are now on the U.K.’s red list. The HSA is following up on recent arrivals from the countries, it said in a release.

Flights from South Africa, Namibia, Lesotho, Botswana, Eswatini and Zimbabwe were suspended from midday on Friday.