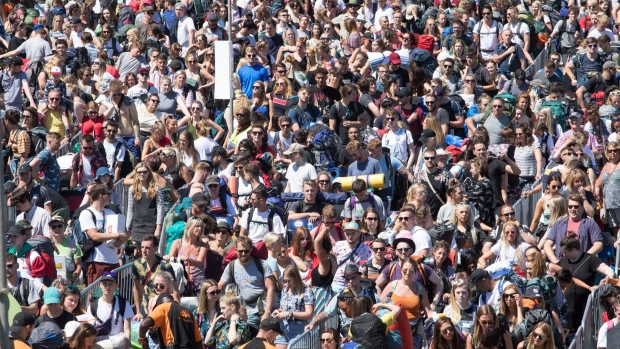 EAST LULWORTH, ENGLAND - AUGUST 02: Festival goers arrive at Bestival, at Lulworth Castle near East Lulworth on August 2, 2018 in Dorset, England. Last weekend, the event's sister festival, the family orientated Camp Bestival, which is hosted at the same site, was cancelled due to severe weather conditions. Described by the organisers as a boutique festival, the event was started in 2004 by DJ Rob da Bank, on the Isle of Wight. In 2018 it moved to the Lulworth Estate, which also hosts its family-friendly sister event, Camp Bestival. (Photo by Matt Cardy/Getty Images) , Photographer: Matt Cardy/Getty Images Europe

(Bloomberg) -- Vaccine certificates in England could be required not just in nightclubs, but also at business conferences, music festivals and sports events from September.

Vaccines Minister Nadhim Zahawi set out a list of venues where proof of double vaccination could become mandatory, after Prime Minister Boris Johnson first announced the move on Monday in a bid to get more young people inoculated.

Answering questions in parliament on Thursday, Zahawi said the government was “most concerned about” places where people gather in large groups such as concerts and venues hosting spectator sports. “We’ve seen in other countries, whether it’s in Holland or in Italy, the opening of nightclubs and then having to reverse that decision rapidly,” he said. “The worst thing for any industry, any sport, is to open and then sadly have to shut down again.”

But he insisted that the vaccine passes plan would not apply to essential retail, transport networks, public buildings or schools and colleges. The government is expected to set out details in September ahead of a vote in Parliament.

Johnson’s announcement triggered fury from the hospitality industry and from many of his own Conservative members of Parliament. He faces a tough battle to get the plan through the House of Commons with the main opposition Labour party against mandatory vaccine certificates for “everyday access” to venues.

The government is keen to encourage more young people to get vaccinated; some 88% of U.K. adults have so far had at least one dose and almost 70% have had two. Covid cases have soared in recent weeks, with 44,104 new infections and 73 deaths logged Wednesday.

By the end of September, everyone at 18 and over will have had the chance to receive both shots and to have had two weeks for immunity to take effect. Ministers are encouraging indoor, crowded venues to use the NHS Covid pass as a condition of entry in the meantime -- asking people to show proof of either double vaccination, a negative test or natural immunity.