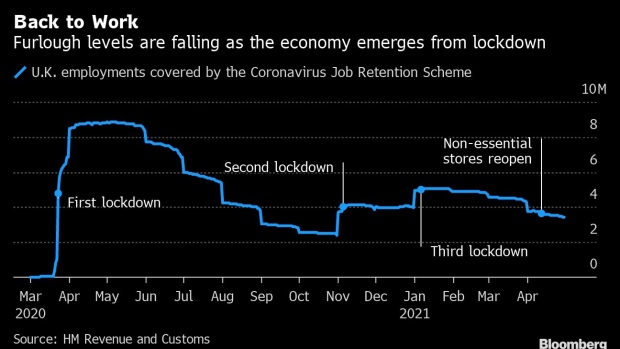 (Bloomberg) -- The U.K.’s tax authority say it expects to recover about 1 billion pounds ($1.4 billion) of fraudulently or mistakenly claimed furlough cash over the next two years.

The figures represent a fraction of the total cost of the government’s furlough scheme -- widely credited with preventing a large spike in unemployment during the crisis. As of mid-May, the plan has paid out a total of 64 billion pounds, while 3.4 million people were still benefiting from the program at the end of April, according to official data.

Tax authority chief Jim Harra said in September companies may have submitted as much as 3.5 billion pounds of fraudulent or mistaken claims for furlough cash. Officials had planned on the assumption of between 5% and 10% of claims being wrongfully submitted, he said.

That range, however, is a “high-level planning assumption” and granular estimates won’t be ready until the end of the year, Alexander said, adding that only five people to date had been arrested for furlough fraud.

“The vast majority of people have claimed what they’re entitled to --we are talking about a minority of people who have tried to cheat the system,” she said.