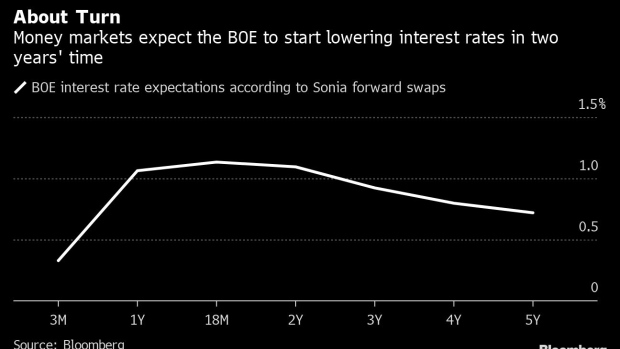 Pedestrians pass the Bank of England in the City of London, U.K., on Thursday, Nov. 4, 2021. The Bank of England will decide Thursday whether to deliver its first interest rate hike since the pandemic as a divided Monetary Policy Committee grapples with spiking inflation and slowing growth. , Bloomberg

The U.K. yield curve is toying with a level last breached in the depths of the financial crisis, as traders weigh the pandemic’s continued drag on growth against decade-high price pressures.

The spread between 10- and 30-year gilts briefly fell to zero on Wednesday after the Federal Reserve expressed openness to a faster withdrawal of stimulus despite concerns over the omicron variant. However, comments from one of the Bank of England’s most hawkish board members on the advantages to waiting for more data on the strain saw the curve re-steepen Friday as traders pared back wagers on a December hike.

“The problem with the U.K. is it’s just the worst in all these factors,” said Mark Nash, head of fixed income alternatives at Jupiter Asset Management.

“If the Bank of England has to act on higher inflation while the economy’s not great, that’s really going to slow things down the line. You can see why the yield curve should be very flat.”

The U.S. yield curve led the flattening trend after Fed Chair Jerome Powell opened the door to a faster pace of tapering this week, catching analysts who expected a dovish tone after the arrival of the new variant unawares. Risk assets collapsed and credit markets posted their worst November in ten years as reports of omicron came in from around the world.

“The reality is, you’ve had massive inflation surprises, a lot of central bank hawkishness and yields in the back end have not moved,” said George Saravelos, head of FX research at Deutsche Bank AG, in a interview with Bloomberg Television.

For the Bank of England, omicron could take the chance of a rate hike this month off the table. Short-end gilts rallied and the curve steepened after Michael Saunders, a typically hawkish member of the monetary policy committee, said the variant would be a key consideration for the decision on whether to raise rates.

More on the Virus: Omicron Linked to Threefold Surge in Reinfection Risk

Even after Saunders’ comments, the spread between 10-year and 30-year debt was just 10 basis points, and some portions of the gilt curve are already inverted.

Traders are now betting Bank of England interest rates will peak at 1.14% in 18 months before reversing course and flipping to an almost 25-basis-point cut in three years’ time. In the U.S., traders are also contemplating eventual rate cuts by the Fed, although not until 2025.

The flattening trend in gilts has been helped by a surprise drop in the supply of longer-dated bonds. Since the U.K.’s debt management office slashed sovereign issuance by more than expected, the curve has trended flatter as long-dated debt rallied.

Jupiter’s Nash is using derivatives to bet the U.S. curve will flatten closer to that of the U.K. and predicts the spread between 5- and 30-year debt could dip into negative territory. Bank of America analysts see the gilt curve re-steepening in 2022 as traders rethink rate-hike pricing and quantitative easing comes to an end. Bets on an aggressive hiking path are bound to be disappointed, they say.

Still, if investors get “increasingly concerned about the spread” of the variant, it could prompt flattening, according to Pooja Kumra, rates strategist at TD Securities. “Markets pushing back rate hikes should support steepening here. But the key risk is the virus.”