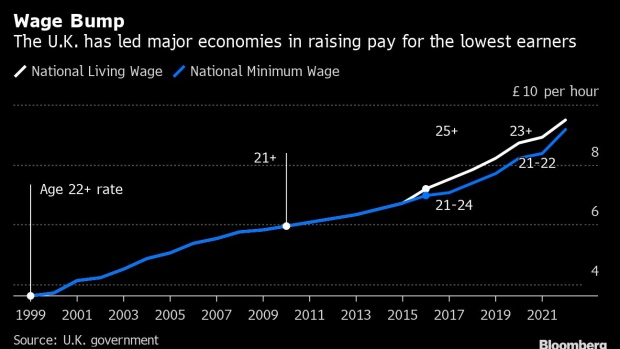 A clock face on the Elizabeth Tower, also known as Big Ben, as restorations continue on the Houses of Parliament in London, U.K., on Wednesday, Jan. 12, 2022. U.K. Prime Minister Boris Johnson sought to head off a growing revolt within his own party, offering an apology for attending what he called a “work” event in the Downing Street garden during lockdown, when outside parties were illegal. Photographer: Chris J. Ratcliffe/Bloomberg , Bloomberg

(Bloomberg) -- British lawmakers have accused the government of leaking market sensitive information to the media before the budget last October.

In a report published Thursday, the influential Treasury Committee called for a formal investigation after the national minimum wage rate was reported by ITV News two days before the budget.

A number measures were trailed but the announcement of a 6.6% increase in the minimum wage for those aged 23 and over constituted “inside information as defined by market abuse regulations,” the cross-party panel said.

In the build-up to the Oct. 27 budget, Chancellor of the Exchequer Rishi Sunak was accused by lawmakers of treating Parliament with contempt by briefing so many measures to the press.

In a letter to the committee, Tom Scholar, the Treasury’s top civil servant, denied that the minimum wage rise was inside information as it was “an economy-wide measure.”

However, he did not deny that the announcement was market sensitive. The Department for Business, Energy and Industrial Strategy is in charge of minimum wage policy, which would be expected to lead any internal investigation.

“The unauthorized and premature disclosure was clearly unfortunate, and should not have happened,” Scholar said. The Treasury confirmed the announcement shortly after ITV News published it on Twitter.

The Treasury Committee said “it is not unreasonable to conclude that the announcement of the change to the National Living Wage might have been market sensitive,” since the Office for National Statistics deems retrospective wage data to be market sensitive.

It argued that the release constituted “inside information” because companies with large numbers of low wage staff would be disproportionately affected.

In a statement responding to the report, the Treasury said it followed principles set out in a review on pre-budget briefings and that it didn’t pre-release the heart of the statement.

“We share the committee’s concerns that the National Living rate was leaked prior to the budget, and the government will review the arrangements ahead of future announcements,” the Treasury said.

The committee’s criticism was contained in a wide-ranging inquiry into the Autumn Budget and the Treasury’s review of departmental spending. The report also warns the government that: