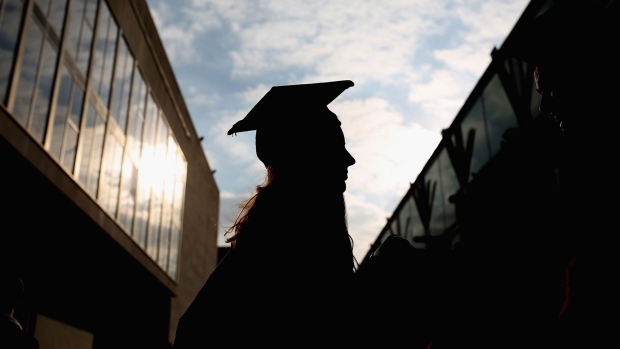 (Bloomberg) -- The U.K. government is being accused of imposing a stealth tax on graduates after announcing that payment thresholds on student loans are to be frozen.

The Institute for Fiscal Studies said graduates earning 30,000 pounds ($40,200) a year will pay 113 pounds more toward their student loan in the coming fiscal year as a result of the decision, adding to the burden of planned increases in payroll taxes and energy bills.

“What really matters is how long this threshold freeze will stay in place,” said Ben Waltmann, senior research economist at the IFS.

“If it is only for one year, the impact on graduates will be moderate, and the government can only expect to save around 600 million pounds per cohort of university students,” he said. “If it stays in place for longer, it could transform the student loan system, with a much lower cost for the taxpayer and a much higher burden on graduates than they thought they had signed up for when they took out their loans.”

“It is now more crucial than ever that higher education is underpinned by just and sustainable finance and funding arrangements, and that the system provides value for money for all of society at a time of rising costs,” Donelan said in a written statement to Parliament.

Graduates begin paying off their student loans, with interest, once their salary exceeds a certain level. That threshold will remain at 27,295 per year in the 2022-23 financial year, which begins in April. The level for post-graduate student loans will be frozen at 21,000 per year.

Waltmann estimated a one year freeze would have the effect of saving the government “somewhere in the low hundreds of millions of pounds a year.” The financial benefit for the state increases every year the threshold is held unchanged.