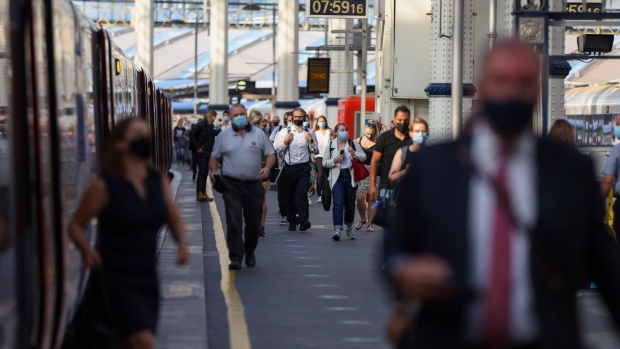 Commuters walk along a platform after arriving at London Waterloo railway station, on so-called 'Freedom Day', in London, U.K., on Monday, July 19, 2021. Boris Johnson's plan to get the U.K. back to normal is in disarray, with Covid-19 cases rising the most in the world and a public outcry over the prime minister's perceived attempt to dodge isolation rules. Photographer: Hollie Adams/Bloomberg , Bloomberg

(Bloomberg) -- The U.K. borrowed less than officials forecast in the first three months of the fiscal year as an unexpectedly strong economic rebound absorbed workers who were receiving benefits.The budget deficit stood at 69.5 billion pounds ($94.5 billion) between April and June, according to government figures published Wednesday. That’s well below the 92.7 billion pounds forecast by the Office for Budget Responsibility back in March.

In June alone, spending exceeded receipts by 22.8 billion pounds, the second highest reading for the month on record, the Office for National Statistics said. The median forecast in a Bloomberg survey of economists was a shortfall of 21.9 billion pounds.The strength of the rebound from the deepest slump in 300 years has taken most forecasters by surprise, with Bank of England Deputy Governor Dave Ramsden predicting the economy could even return to its pre-Covid size as early as the current quarter. For the public finances, the pickup is translating into more tax revenue from newly employed workers and less spending on pandemic support such as furlough payments.That’s a boost for Chancellor of the Exchequer Rishi Sunak, who saw the budget deficit balloon to a peacetime high of over 14% of GDP in the last fiscal year. In March, the fiscal watchdog predicted borrowing would fall to just above 10% this year, but the latest developments suggest it could be even lower.

“Stronger economic growth and with it stronger receipts will be welcome news to the chancellor,” said Isabel Stockton, research economist at the Institute for Fiscal Studies “Borrowing remains very high. Our forecasts suggest the chancellor has almost now additional wiggle room for permanent spending giveaways.”

The IFS estimates the Treasury’s borrowing could come in 30 billion pounds lower in the current fiscal year than the 234 billion pounds forecast in the budget in March. That windfall won’t persist because of permanent damage done to the economy by the pandemic and rising debt interest costs. It also estimates that health, education and transport need at least 10 billion pounds extra in each of the next three years.

Sunak is hoping to eliminate borrowing for day-to-day spending by the middle of the decade, with a combination of economic growth, tax rises on companies and departmental budget cuts.Some of the undershoot relative to the OBR forecast is due to the ONS not yet incorporating the cost of Britain’s Brexit divorce bill. A decision on how to treat these payments in the government accounts could add billions to spending and net borrowing.