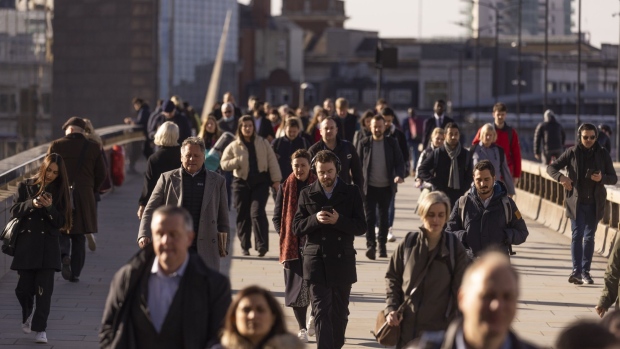 Metropolitan Police officers patrol alongside commuters on London bridge in London, U.K., on Monday, April 11, 2022. The labor market data for February will probably give the Bank of England the ammunition it needs to justify another rate hike in May. , Bloomberg

The House of Commons Women and Equalities Committee earlier this year called on ministers to pass a law introducing the metric for companies with over 250 employees -- as has been the case since 2017 for gender pay gap reporting. But the government on Friday issued its response, pushing back against the proposal.

Ethnicity pay gap reporting “may not be the most appropriate tool for every type of employer seeking to ensure fairness in the workplace,” it said in a statement. “The government does not want to impose new reporting burdens on businesses and will not be legislating for mandatory reporting.”

The government said its approach is backed by the Commission on Race and Ethnic Disparities, which in 2021 released a report saying ethnicity pay gap reporting should be voluntary, with the government providing guidance to businesses that choose to adopt it.

“There are significant statistical and data issues that would arise as a result of substituting a binary protected characteristic (male or female) with a characteristic that has multiple categories,” the government said.

But the Commons committee chair, Caroline Nokes, a member of the ruling Conservative Party, called the response “nonsensical” and “disappointing.”

The government “claims that gathering the necessary data would be too difficult, and then promptly outlines how this could easily be addressed,” Nokes said in a statement. “What is lacking in this administration is not resource or know-how, but the will or care to foster a fairer and more equal society.”