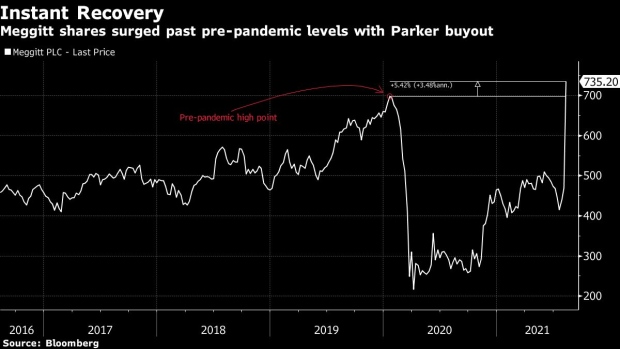 The headquarters of Meggitt Plc in Coventry, U.K., on Monday, Aug. 2, 2021. Parker-Hannifin Corp., the U.S. maker of industrial motion-control systems, agreed to buy Meggitt for 6.3 billion pounds ($8.8 billion) in cash to strengthen its hand in a rebounding aerospace industry. , Bloomberg

(Bloomberg) -- U.K. Business Secretary Kwasi Kwarteng is taking an active interest in the agreement by Parker-Hannifin Corp. to buy the British defense and aerospace manufacturer Meggitt Plc, a person familiar with the matter said, suggesting ministers may seek more reassurances on preserving jobs.

Meggitt is one of the few remaining U.K.-based civil aerospace and defense companies, and as such, Kwarteng’s Department for Business, Energy and Industrial Strategy and the Ministry of Defence are working to assess the transaction in more detail, according to the person, who requested anonymity talking about a commercial deal.

No decision has been taken to intervene at this stage in the 6.3 billion-pound ($8.8 billion) transaction, the person said. Kwarteng wants further clarity from Parker-Hannifin and Meggitt including on their long-term intentions and their plans to protect jobs and U.K. operations, the person said.

The deal is the latest example of U.S. buyers eyeing U.K. aerospace. Cobham Ltd., the U.K. defense contractor that was acquired by U.S. private equity firm Advent International Corp. in early 2020, last month made a 2.6 billion-pound buyout approach for Ultra Electronics Holding Plc. The government scrutinized the first Cobham deal and said it would do the same for the Ultra proposal.

Under the Enterprise Act 2002, Kwarteng has quasi-judicial powers to intervene in mergers and acquisitions on national security grounds. The new National Security and Investment Act, which widens those powers and allows for retrospective interventions, comes into force on Jan. 4.

BEIS didn’t immediately respond to a request for comment.

Shares of Meggitt surged the most on record after the 170-year-old company said its board would recommend the 800 pence-per-share offer, 71% above Friday’s closing price.

Parker-Hannifin Chairman and Chief Executive Officer Tom Williams said on a call with journalists Monday that the company was committed to protecting R&D spending at Meggitt for the next five years, conceding that the company’s other guarantees, including pledges to maintain technology and manufacturing in the U.K., are only valid for one year.

The guarantees mean a “significant proportion” of Meggitt’s U.K. jobs are protected, he said, while declining to give a specific figure. U.K. officials will want additional safeguards and fresh guarantees from the U.S. acquirer, the person familiar said.