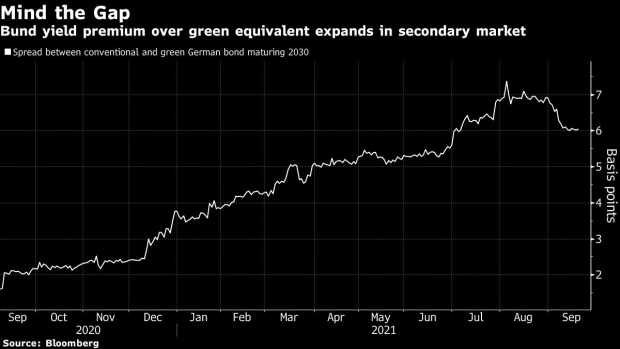 The sun sets behind onshore wind turbines and an electricity transmission pylon on the Little Cheyne Court Wind Farm near to Camber, U.K., on Monday, Oct. 26, 2020. The U.K.'s power supply buffer is set to shrink this winter compared to last year due to outages at power plants and the unexpected closure of two of Calon Energy Ltd.'s gas-fired stations after the company went into administration. Photographer: Chris Ratcliffe/Bloomberg , Bloomberg

The U.K.’s green bond debut broke records as investors jumped on the most anticipated sterling debt sale of the year.

The U.K. will raise 10 billion pounds ($13.7 billion) from green debt maturing in 2033, a record for a green bond sale. It has attracted over 100 billion pounds of orders, also an all-time high for both U.K. gilts and the global green market, beating Italy’s debut earlier this year.

While a boom in global sales looks set to take ethical debt issuance toward $1 trillion this year, deals in sterling remain a small fraction of that. As recently as last year Robert Stheeman, the head of the U.K.’s Debt Management Office, said green gilts would be merely a “symbolic” step unless investors were prepared to pay more.

Tuesday’s deal will be sold at 7.5 basis points over the June 2032 gilt. The pricing suggests the U.K. achieved slightly cheaper borrowing costs relative to conventional debt -- known as a greenium -- of around two basis points, according to RBC Europe Limited strategist Megum Muhic, who cited fair-value estimates based on the security’s maturity and duration.

“It’s an important market development that I suspect will be a catalyst for issuance in the U.K.,” said Scott Freedman, a portfolio manager at Newton Investment Management, which runs 1.7 billion pounds in sustainable bond funds.

The U.K. plans to sell at least 15 billion pounds ($20 billion) of green bonds this fiscal year. The funding effort will still leave Britain as a latecomer to the market, with most western European countries including France, Germany and Ireland having sold such debt.

The proceeds will be managed through the U.K.’s unique sustainable debt framework, which has drawn mixed views from investors.

Bryn Jones, the manager of Britain’s largest ethical bond fund, praised the reporting requirements including the tracking of social as well as green benefits. Triodos Investment Management BV, on the other hand, said last week the British spending plans didn’t meet its standards due to proceeds being used for carbon-capture technology and so-called blue hydrogen. That didn’t stop a clamor for orders.

“The launch should be particularly appealing to the pension scheme industry, where ESG considerations are becoming increasingly relevant,” said Agne Stengeryte, a rates strategist at Bank of America Corp.