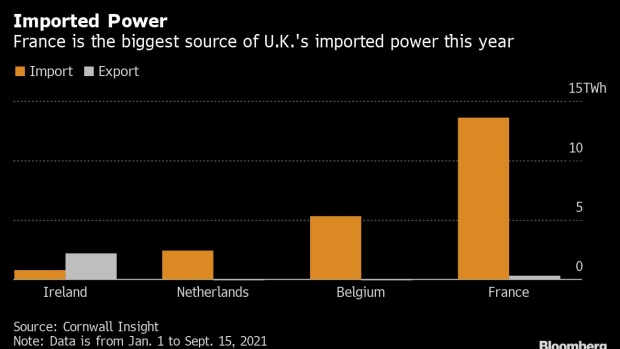 The Sellindge Convertor Station, operated by National Grid Plc, following a fire at the IFA interconnector site, in Sellindge, U.K., on Thursday, Sept. 16, 2021. Winter blackouts are now a real possibility after the fire took out a key cable that ships electricity to the U.K. from France. , Bloomberg

The U.K.’s grid operator delayed the restart of a key power cable from France by almost a month, potentially deepening the nation’s energy crisis.

Half the capacity of the IFA-1 U.K.-France line will come online Oct. 23, following a fire that knocked out the conduit earlier this month, National Grid Plc said in a remit notice. It had originally targeted Sept. 25 for the partial restart. Full 2,000-megawatt capacity is not expected until March 27.

The delay comes as the U.K. is already struggling with potential shortages and sky-high prices for natural gas and power that threaten to tip electricity suppliers into bankruptcy. Britain is a net importer of power, with France its biggest supplier via connectors that run across the English Channel.

“Our investigation into the fire at Sellindge is ongoing,” a National Grid spokesperson said. “We are completely focused on getting IFA safely returned to service as soon as possible.”

Even as gas prices soared to fresh records on Monday, Business Secretary Kwasi Kwarteng said the government doesn’t expect any disruption to electricity or gas supplies this winter.