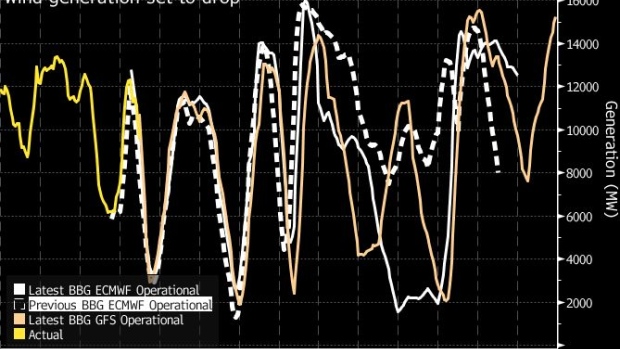 (Bloomberg) -- Britain’s electricity network operator issued its first warning this winter that the system is running with a perilously small buffer. It quickly retracted the order, but it’s a reminder of how tight the system has become.

It’s the first time this winter that National Grid Plc sent an alert asking power plant operators to increase production to help keep the lights on. The warning happens automatically, four hours in advance, if the buffer of spare capacity is forecast to drop below permitted levels.

The warning was issued for 5:30 p.m. London time and was quickly canceled but it indicates that Britain will need to rely on its few remaining coal stations to ensure there’s no shortage. The de-rated margin, or the excess supply above peak demand, is expected to fall away to about 2 gigawatts, the equivalent of two nuclear power stations.

The grid operator describes the notice as a signal that “the risk of a System Stress Event is higher than normal.”

The U.K.’s wind-power drive has dramatically cut carbon emissions, but it’s also created a vulnerability that’s exposed during calm weather. There are plans to quadruple offshore wind capacity by 2030 as part of efforts to be net zero by 2050. But a smooth transition from fossil to greener fuels isn’t guaranteed, and regular capacity crunches could become the norm.

It’s likely there will be more warnings this winter -- in its winter outlook report National Grid predicted about six. The network operator has acknowledged that the buffer between supply and demand is now smaller than in previous years. Margin has shrunk to 6.6% this year down from an earlier prediction of 7.3% and much lower than 8.3% last year.

A more serious warning called an Electricity Margin Notice is the next stage and that’s not automatic but it’s still a way off the lights going out.