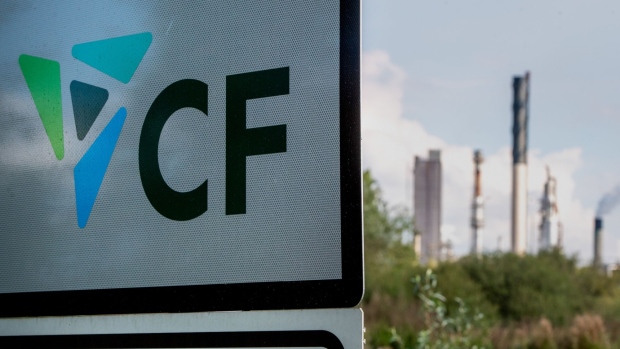 The CF Industries Holdings Inc. fertilizer manufacturing complex, which is being forced to be shut down due to high natural gas prices, in Ince, U.K., on Thursday, Sept. 16, 2021. Europe's energy crunch has forced the major fertilizer maker to shut down two U.K. plants, with no estimate for when production will resume. Photographer: Anthony Devlin/Bloomberg , Bloomberg

The U.K. government reached a deal for CF Industries Holdings Inc. to restart fertilizer production and ease a shortage of carbon dioxide that’s crucial for the food industry, a person familiar with the matter said.

The CO2 shortage has threatened U.K. food supplies at a time when the industry was already battling to keep shelves and menus stocked amid a lack of workers. The gas is used to stun pigs and chickens for slaughter, as well as in packaging to extend shelf life and the ‘dry ice’ that keeps items frozen during delivery. Online grocer Ocado Group Plc had to stop supplying frozen products and the meat sector said businesses could “grind to a halt” within weeks.

The British Soft Drinks Association has said manufacturers have just days of carbon dioxide left in reserve to produce beverages and can’t import supplies from the European Union due to Brexit. CO2 supplies have also been hit as Norway’s Yara International ASA curtails European capacity.