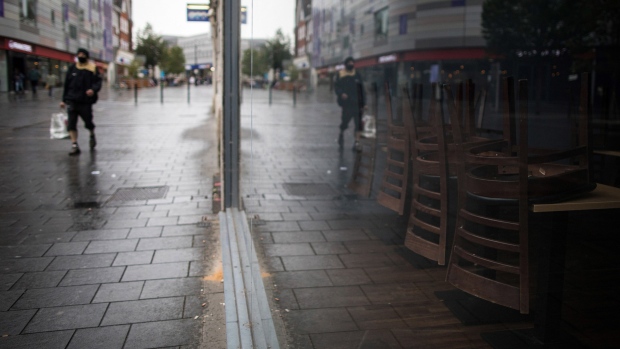 Chairs sit stacked on tables inside a temporarily closed restaurant in Luton, U.K., on Wednesday, Sept. 2, 2020. The Bank of England is touting the firepower it can use to deliver more stimulus as the U.K. enters what could be a chaotic final few months of 2020. , Bloomberg

(Bloomberg) -- Chancellor of the Exchequer Rishi Sunak hinted that he will support U.K. jobs beyond the end of the government’s furlough program next month, meeting a key demand of business lobbies, economists and the opposition Labour Party.

“Businesses do need support,” the finance minister told Parliament on Tuesday after being asked by Treasury Committee Chairman Mel Stride if he will provide more assistance after the end of October. “I hope that he will be reassured that throughout this crisis I have not hesitated to act in creative and effective ways to support jobs and employment and will continue to do so.”

The Treasury has repeatedly said the furlough program -- under which the government has paid as much as 80% of the wages of more than 9 million people -- will close on Oct. 31. Amid warnings that unemployment could spike to levels not seen since the 1980s, Sunak has come under growing pressure to either extend or replace the program with more targeted support for jobs in the most affected sectors.

Sunak still isn’t planning to extend furlough -- but he is preparing new measures to support jobs, according to two people familiar with the matter.

The chancellor told the Cabinet earlier on Tuesday that “indefinitely keeping people out of work is not the answer. But rest assured we will be creative in order to find ways of effectively helping people.” The comments were reported earlier by The Sun newspaper.