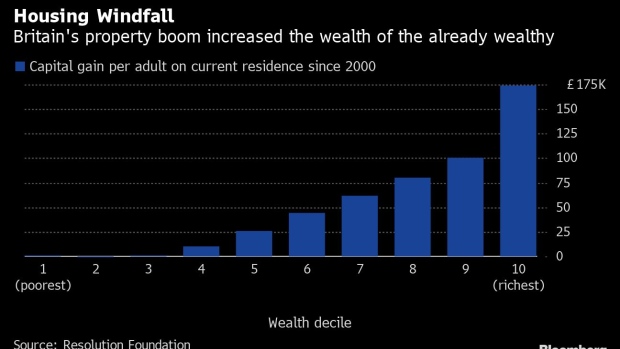 (Bloomberg) -- British homeowners have enjoyed a 3 trillion pound ($4 trillion) untaxed wealth windfall from rising property values over the last 20 years that is unlikely to be repeated, with the bulk of riches going to the well-off, the over 60s and those living in London.

In a report calling for gains to be taxed, the Resolution Foundation said the surge in house prices since 2000 that has turned many homeowners into millionaires has been “driven primarily by falling interest rates.”

“Although this tax treatment has largely been a matter of political consensus in Britain over recent decades, the scale of gains are far beyond anything envisaged by any policy maker,” Resolution said. The gains are “unequal, unearned and untaxed.”

The windfall has not been evenly distributed. Existing homeowners gained the most, “particularly those who were fortunate to buy in the late 1990s and early 2000s.”

In London, the average increase in main residence value was 76,000 pounds since 2000, but just 21,000 pounds in the North East of England. Some of the increase reflects home improvements but “the vast majority” is down to simple house-price inflation.

Such a large windfall should persuade policy makers “to revisit long-established attitudes” to the taxation of primary homes. In the two budgets this year, Chancellor of the Exchequer Rishi Sunak raised taxes on business profits and incomes to help bring down borrowing, taking the national tax burden as a share of GDP to its highest since the 1950s.

Resolution said the U.K. could spread the tax burden by introducing capital gains tax on first homes, following the example set by Sweden, Portugal and the U.S.

A 28% tax rate with a 75,000 pound tax-free allowance per person per property would protect 60% of people while raising 4 billion pounds. An alternative would be to reform inheritance tax reliefs.