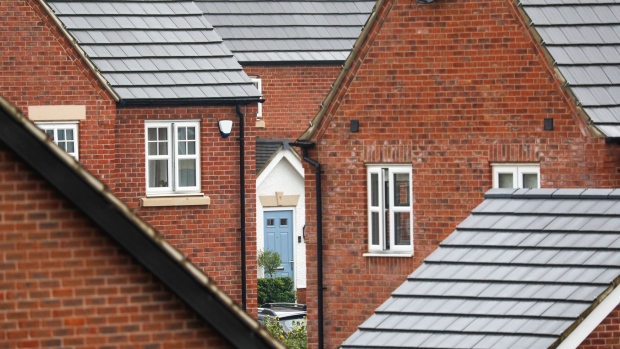 A front door is seen between properties on a new housing development in Loughborough, U.K., on Saturday, July 3, 2021. Global valuations in the property markets are soaring at the fastest pace since 2006, according to Knight Frank, with annual price increases in double digits. Photographer: Darren Staples/Bloomberg , Bloomberg

(Bloomberg) -- U.K. house prices fell unexpectedly in July, signaling a loss of momentum in the housing market after a tax break on purchases began to be phased out.

The figures represent a return to more normal conditions after a frenzied first half that saw the housing market defy the worst economic slump in more than 300 years. Demand was driven by the prospect of thousands of pounds of savings for purchases completed by June 30 and a pandemic-induced quest for homes with more space away from built-up urban areas.

While record property values threaten to entrench economic divisions in the U.K., Bank of England officials aren’t worried that the boom is leading to an unsustainable buildup of debt. In their latest financial stability report, they said mortgage-to-income ratios had risen only marginally.