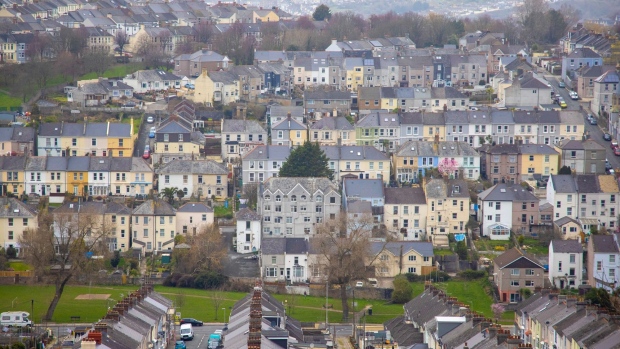 Terraced housing near the site of the Devonport freeport in Plymouth, U.K., on Thursday, March 4, 2021. U.K. Chancellor Rishi Sunak unveiled Devonport among the roster of eight English freeports, low-tariff business zones being created to stimulate trade and investment in the wake of Brexit and the coronavirus crisis. Photographer: Jason Alden/Bloomberg , Bloomberg

The U.K. housing market picked up last month as inquiries, sales and new listings all climbed following an extension of a temporary tax break.

New buyer inquiries jumped the most since September, according to the Royal Institution of Chartered Surveyors. That’s adding to demand that continues to outstrip supply, despite an increase in sellers bringing new properties to the market. The outlook for sales was the most upbeat since before the pandemic, and prices rose across all regions of the country.

Britain’s property market shook off the worst recession in three centuries, buoyed by a tax holiday on purchases that Chancellor of the Exchequer Rishi Sunak extended until September. That along more flexible work-from-home policies spurred buyers weary from lockdowns to push ahead with finding a new place to live.

“Demand is outstripping supply,” Simon Rubinsohn, chief economist at RICS, said in a statement released on Thursday. “Prices continue to move upwards. More worryingly, this is also being reflected in the price expectations data both at the 12-months horizon and beyond.”

The imbalance in demand also has spread to the lettings market, where the number of tenants looking for properties rose even as listings by landlord declined. Respondents said rents will likely almost 3% in the next year, except in London where the market has stagnated.

Here’s a roundup of comments made by agents in the RICS survey:

“Much will depend upon whether there is a strong economic bounce back as the Bank of England predicts. We have our reservations. If the government moves the goalposts or introduces further lockdowns later this year, there will be no recovery in central London.”

“Demand for houses at all levels is unprecedented. Severe lack of stock is making this a sellers market, the like of which we haven’t witnessed since 2007. Let’s hope the consequence is not the same as in 2008.”

“The speed of the Midland’s economic recovery, low interest rates and people’s lifestyle changes are the catalysts for the current busy housing market, fueled by the extended Stamp Duty holiday. Demand is exceeding supply by far.”

“Aberdeenshire is seeing a positive increase in demand for properties, particularly with land, space and privacy. We are confident this will continue thorough Spring and Summer.”