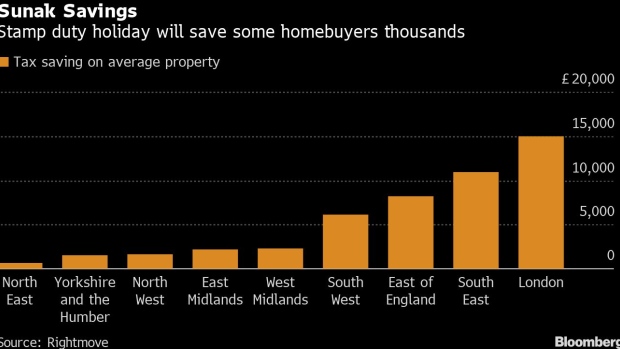 (Bloomberg) -- The U.K. property market was showing signs of returning to life last month even before the government announced an enormous tax break for most home buyers.

Listings and inquiries picked up in June as the coronavirus lockdown started to ease, the Royal Institution of Chartered Surveyors said Thursday. The report comes a day after Chancellor of the Exchequer Rishi Sunak announced that most buyers won’t have to pay stamp duty, a tax on the final sale price, until March.

The tax cut removes the levy on the first 500,000 pounds ($630,000) of the selling price, leaving almost nine out of 10 buyers paying nothing to the government. The move promises to lift the market after realtors in the RICS survey had become pessimistic and the headline price index had fallen for a third month.

“Lockdown prevented 175,000 would-be sellers from coming to market,” said Miles Shipside, a director at property website Rightmove Plc that publishes it own indicator of asking prices. “They will find there’s currently record demand for their properties from prospective buyers.”

Rightmove said traffic on its website jumped 22% in the first half hour after Sunak spoke on Wednesday.

The RICS survey, completed before the announcement, showed that realtors had expected sales to decline over the coming year amid rising unemployment and tighter lending conditions.