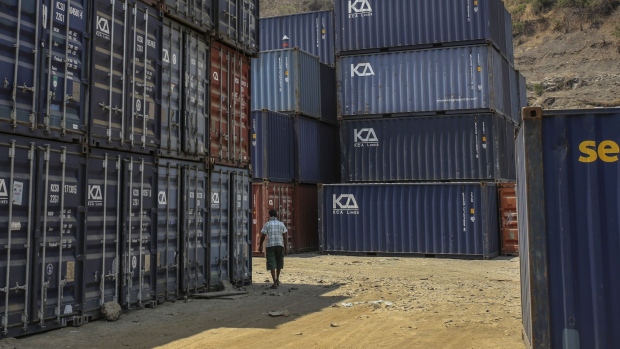 Shipping containers stand at the Jawaharlal Nehru Port, operated by Jawaharlal Nehru Port Trust (JNPT), in Navi Mumbai, Maharashtra, India, on Monday, March 30, 2020. As billions of people stay home in the the world's major economic centers, consumption of everything from transport fuel to petrochemical feedstocks is in freefall. Refiners that have already been filling up their storage tanks with unsold products now have little choice but to partially shut down their plants. Photographer: Dhiraj Singh/Bloomberg , Bloomberg

The U.K. and India said they want to double their trade by 2030, ahead of a virtual meeting between Boris Johnson and Narendra Modi on Tuesday.

Seeking new trading partners after leaving the European Union, the U.K. government revealed the ambition along with an announcement of 1 billion pounds ($1.4 billion) of extra trade with India which it said would create 6,500 British jobs. The extra investment comes ahead of negotiations for a formal free-trade agreement, with talks expected to start in the fall, according to International Trade Secretary Liz Truss.

“This is going to be a win-win for both countries,” Truss said on Sky News. “There are currently very high tariffs on products like cars and whisky into India -- we want to see those tariffs removed to benefit businesses in Britain.”

U.K.-India trade is currently worth about 23 billion pounds a year, according to the British government. In 2019, 1.1% of U.K. exports went to India, and 2% of Britain’s imports came from the country.

The Johnson-Modi call comes as India battles a deadly new wave in the coronavirus pandemic, and Britain has been helping send emergency equipment and oxygen. Johnson said the extra trade from their deeper economic partnership would boost their respective recoveries from the pandemic.

The trade package includes 533 million pounds of new Indian investment into the U.K. in areas such as health and technology. The highest profile deal is a 240 million pound investment by the Serum Institute of India into their vaccine business, the British government said.