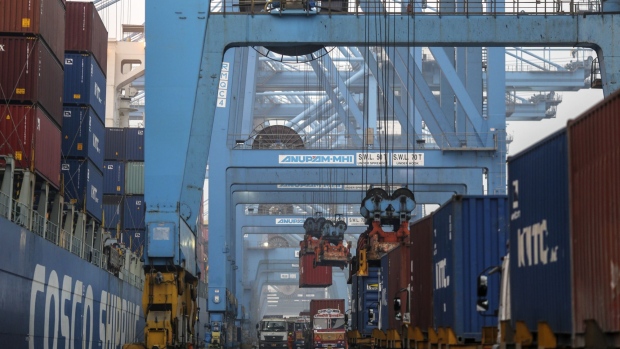 Gantry cranes load shipping containers onto trucks from the Cosco New York container ship docked at the Jawaharlal Nehru Port, operated by Jawaharlal Nehru Port Trust (JNPT), in Navi Mumbai, Maharashtra, India, on Saturday, Dec. 16, 2017. Many of the cargo containers passing through India's busiest port in Mumbai have a small piece of Japan Inc. attached: Devices from NEC Corp. that can be tracked as the containers rumble through the interior of Asia's third-largest economy. Photographer: Dhiraj Singh/Bloomberg , Bloomberg

(Bloomberg) -- India and the U.K. will start negotiations for a free trade deal later this year, including a series of working groups from this month, the British High Commission in New Delhi said in a statement on Tuesday.

The agreement to start talks comes after Britain’s International Trade Secretary Liz Truss spoke to India’s Minster for Commerce and Industry Piyush Goyal on Monday to “discuss the scope and ambition” for a free trade deal between the two countries after a public consultation in the U.K last month.

“These discussions between the UK and Indian Governments will help both sides better understand each other’s position on potential chapter areas in any trade deal including tariffs, standards, IP and data regulation,” the High Commission said.