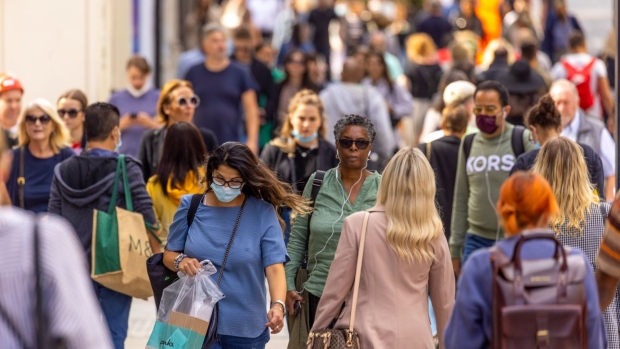 Shoppers walk along Oxford Street in central London, U.K, on Monday, Sept. 13, 2021. While the initial frenzy to return to the high street may be waning, August is likely to have seen increased spending on clothes and personal care items in preparation for more people returning to offices from September. Photographer: Jason Alden/Bloomberg , Bloomberg

British consumers expect inflation will remain above the Bank of England’s target for at least the next five years, a survey showed in an indication that attitudes about rising prices are becoming entrenched.

The central bank’s quarterly inflation attitudes survey by the market research firm Kantar showed those who responded to the survey expect a 2.7% increase in prices over the next year, up from 2.4% in May. Over the next five years, respondents saw a rise of 3%.

The readings were all above the BOE’s 2% target. The central bank watches attitudes about inflation carefully, seeking to maintain perceptions that the aggregate level of prices will remain stable to prevent a spiral of expectations that would drive up costs and wages across the economy.

Policy makers in recent weeks have shifted their concerns toward how to prevent the economy from overheating. They’re starting to weigh how they will pare back the stimulus they’ve been injecting into the economy since the start of the pandemic.

BOE Governor Andrew Bailey has said he is among officials who think a minimum criteria for tighter monetary policy has been met. The case for tightening may also have grown after U.K. consumer prices hit the highest level in nine years in August.

The BOE forecast that price gains will peak at 4% at the end of the year -- twice its target -- then fall in 2022 and 2023. Money market traders now see a quarter percentage point increase to the BOE’s key interest rate by December 2022, in addition to a 15 basis point hike that was already priced for May.

The survey by Kantar was done from Aug. 10 to Aug. 16. It showed 43% of respondents expected interest rates to rise over the next 12 months, up from 39% in May.