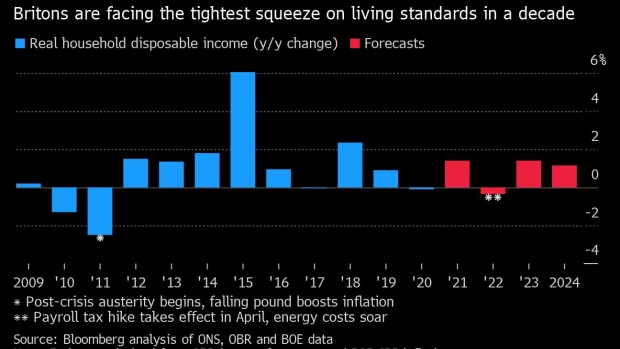 Britain’s surging inflation rate will drag 600,000 more low-wage earners into the Treasury’s tax net, according to the government’s fiscal watchdog.

Chancellor of the Exchequer Rishi Sunak announced last March that thresholds for payments will frozen for four years starting in April 2022. It’s part of his effort to stabilize the huge debts incurred by the coronavirus pandemic.

The figures add to a debate within the ruling Conservative party about how to relieve a squeeze on consumers that’s coming from both swinging increases in energy prices and higher taxes, both of which are due to bite in April. Cabinet minister Jacob Rees-Mogg has called on Sunak to roll back some of his tax increases.

Tax allowances are usually raised in line with inflation, so leaving them unchanged generates revenue for the government by increasing the proportion of incomes that are taxed –- a phenomenon known as fiscal drag.

The 1,500-pound difference is larger than originally forecast due to a sharp upward revision to the inflation outlook. On Thursday, the Office for Budget Responsibility issued a breakdown that for the first time showed how many people will be affected.

It estimated, based on its October forecasts, that 1.95 million individuals will be dragged into the tax net as a result of the freeze, up from a previously estimated 1.34 million. At the same time, the number brought into the higher 40% tax bracket rises to 1.5 million, an increase of almost 500,000.