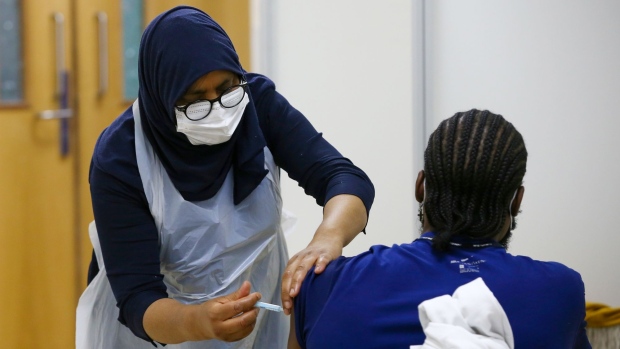 A visitor receives a dose of the AstraZeneca Plc Covid-19 vaccine at Central Mosque of Brent in the Willesden Green district of London, U.K., on Friday, March 19, 2021. Skepticism and misinformation are hampering efforts to protect the U.K.'s most diverse and deprived communities. , Bloomberg

(Bloomberg) -- The U.K. government said it remains on course to meet its Covid-19 vaccination targets, and moved quickly to assuage safety concerns after AstraZeneca doses were effectively ruled out for people under 30.

“When you get the call, get the jab,” Health Secretary Matt Hancock said Wednesday on Twitter, shortly after the U.K.’s drug regulator issued its highly-anticipated safety review of Astra’s vaccine. The U.K. is “on track” to offer a first vaccine dose to all adults by the end of July, he said.

The Medicines and Healthcare products Regulatory Agency said 79 people among the more than 20 million who have received the Astra shot in Britain had suffered rare blood clots, 19 of whom had died. But while it found a “reasonably plausible link” to the vaccine, it did not block its usage.

Instead, the government’s vaccine advisory committee recommended that people aged 18 to 29 should be offered an alternative vaccine where possible.

The decision was a crucial one for Boris Johnson’s government, not least because Astra’s vaccine -- which was developed with Oxford University -- is the workhorse of the program and is made in the U.K. Meeting the inoculation target is also central to his ambition to fully reopen the economy on June 21.

U.K. Recommends Not Using AstraZeneca Vaccine on Those Under 30

The concern now will be whether confidence has been knocked in the Astra vaccine among people aged over 30 -- just as ministers prepare to unlock restaurants and shops that have been shuttered for months next week.

Shops and hairdressers in England are due to reopen on Monday, but the reopening of indoor hospitality and entertainment in mid-May, as well as international travel, is dependent on the vaccine program continuing at pace.

For those under 30, the immediately available alternative to Astra is the Pfizer-BioNtech vaccine, which has been in circulation since December. The U.K. began the rollout of Moderna Inc.’s vaccine on Wednesday.

The Johnson & Johnson vaccine, which only requires one shot rather than two like the others, could become available “over the summer,” Jonathan Van Tam, England’s deputy chief medical officer, said at the briefing.