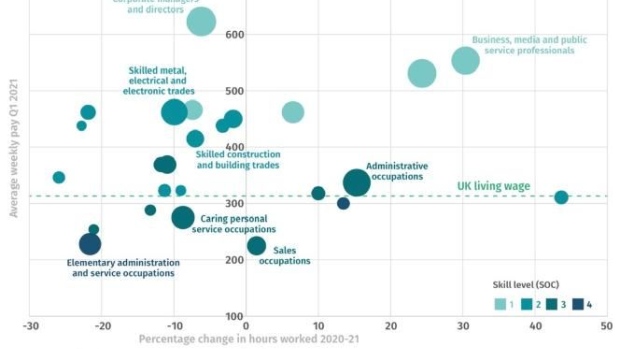 U.K. job creation was concentrated in high-skilled, high-pay roles during much of the pandemic, while job destruction occurred mostly among low-paid, low-skilled roles.

That’s according to a report published Wednesday by the Institute for Public Policy Research. Noting that the decline in employment has been unevenly spread across sectors, the research group warned that most people who lost their jobs during the crisis are likely to lack the skills and training required to be hired in a the newly created role.

The government should “boost it like Biden,” with a stimulus that would mean “employers compete for workers, rather than workers competing for jobs,” IPPR Executive Director Carys Roberts said.

She suggested raising public investment to 5% of GDP -- about the same level as Sweden -- to create more jobs in the middle of the pay spectrum.

The findings chime with a separate report by the Institute for Fiscal Studies showing that job opportunities remain below pre-pandemic levels for a quarter of the British workforce. Together they suggest there’s more slack in the labor market than official estimates show -- and that it will be more difficult to get those without jobs back to work.

Unemployment fell to 4.7% in the quarter through July, the lowest in almost a year. The government’s furlough program, which pays 80% of wages to those whose workplaces closed in pandemic, has largely prevented a surge in joblessness but finishes next week.

Because high-paid jobs have historically been concentrated in major cities, Roberts said that to fulfill its “leveling up” agenda, the government would need to invest in better transport networks so that people in other areas can access them.