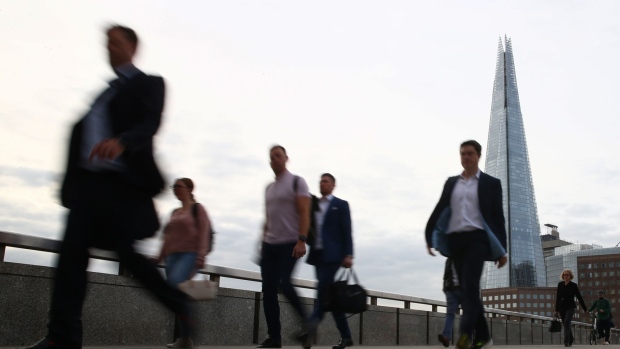 Morning commuters cross London Bridge towards the City of London, U.K., on Monday, Sept. 13, 2021. The ending of the government's furlough scheme in September will be key to the outlook for jobs and interest rates. Photographer: Hollie Adams/Bloomberg , Bloomberg

(Bloomberg) -- Job opportunities remain below pre-pandemic levels for a quarter of the U.K. workforce, the Institute for Fiscal Studies said in a report that suggests more slack in the labor market than official estimates show. A surge in overall vacancies to record levels has been entirely driven by low-paying occupations, where openings are now 20% higher than they were before the pandemic, the research group said in a report published Tuesday. Demand for truck drivers and storage workers has been particularly strong.

The findings indicate the labor market may have more capacity than the headline jobless figures suggest. The Bank of England is examining labor market trends in assessing how long inflation will remain above its 2% target -- and whether it needs to rein in stimulus.

“If some of the still-furloughed workers join the pool of unemployed jobseekers when the furlough scheme ends, competition would be stiffer still,” IFS economists wrote. “The handful of high-profile labor-shortage occupations –- while real, and causing real problems for the supply of certain goods -– should not mislead us into thinking that worker power is back.”

It’s a different story for higher-paying occupation, with vacancies for more than 8 million workers still at least 10% below pre-pandemic levels. Competition for jobs is also stiffer, according to the IFS, which said more unemployed people are chasing each job in the majority of cases.

Unemployment fell to 4.7% in the quarter through July, the lowest in almost a year. The government’s furlough program, which pays 80% of wages to those whose workplaces closed in pandemic, has largely prevented a surge in joblessness.

The analysis, which uses vacancy data from Adzuna, showed openings were fewest relative to 2019 levels in areas such as sales and marketing, finance, law and teaching.