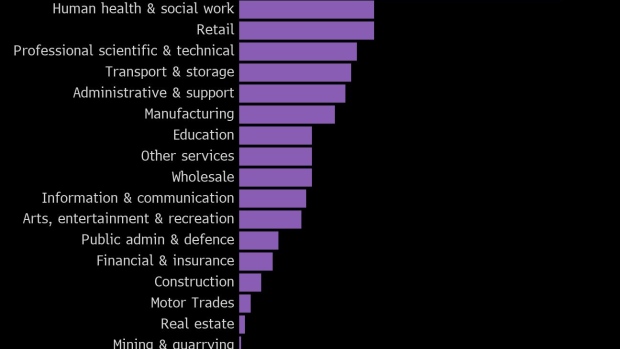 An office worker at a booth in a WeWork co-working office space in the Waterloo district in London, U.K. on Monday, Aug. 2, 2021. A survey this month showed that just 17% of London’s white-collar workers want a full-time return, and many said it’d take a pay rise to get them back five days a week. Photographer: Jason Alden/Bloomberg , Bloomberg

(Bloomberg) -- Britain’s job recruiters called on the government to loosen immigration rules, saying a shortage of workers in the economy is threatening the recovery from the Covid-19 pandemic.

The Recruitment & Employment Confederation said 88% of its members surveyed put labor shortages as one of their biggest concerns for this year. Almost every respondent said it’s taking longer to fill vacancies and almost two-thirds said they have at least 30% more roles to fill than before the pandemic.

The findings add to pressure on Boris Johnson’s government to address supply bottlenecks that held back the pace of growth. The pandemic and Britain’s exit from the European Union have dried up the pool of available workers at a time when more businesses are seeking staff to satisfy a post-lockdown consumption binge.

London Mayor Sadiq Khan, the trucking industry and hospitality companies have also called for more flexibility to draw workers from abroad. The government has so far resisted calls to ease rules for blue-collar hires.

“Vacancy numbers are far higher than pre-pandemic, and it’s taking longer to fill them,” Kate Shoesmith, deputy chief executive officer of the REC, said in a statement released Wednesday. “This is putting th recovery at risk by putting capacity constraints on the economy.”

The the REC also said: