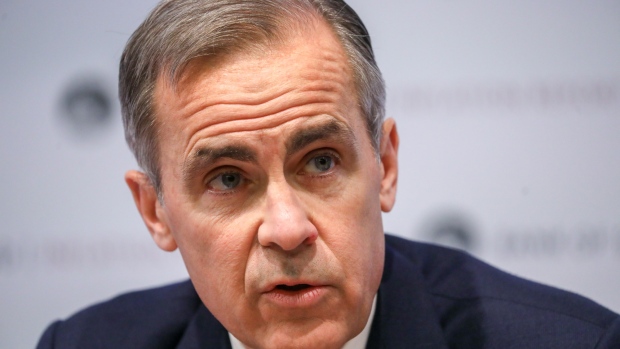 The U.K. formally kick-started its search for Mark Carney’s successor as governor of the Bank of England, a role that’s been linked to both senior people within the institution and ex-central bankers around the world.

Canadian-born Carney was the first foreigner to run the BOE, and Chancellor of the Exchequer Philip Hammond has said he’s willing to look abroad again, emphasizing the need for a replacement with international stature.

A number of names have been linked to the role, most notably Raghuram Rajan, the University of Chicago professor who previously led the Reserve Bank of India. BOE deputy governors Ben Broadbent and Dave Ramsden, as well as Financial Conduct Authority boss Andrew Bailey, have also been mentioned. Others include Sharon White, head of the U.K.’s communications regulator, Santander U.K. Plc Chair Shriti Vadera, and BOE chief economist Andy Haldane.

The role at the helm of the three-century-old institution comes with a 480,000-pound ($620,000) salary and Hammond said he hopes to make the appointment in October. Carney was hired by his predecessor, George Osborne, who at the time described him as the “best” in the world.

Hammond said that the next BOE governor wouldn’t necessarily have to serve a full eight-year term. Carney initially agreed to serve five years.

The U.K. needs a candidate with the “right skills and experience” to take over from Carney, whom Hammond praised for steering the U.K. economy through a “challenging period.”

This month, the chancellor acknowledged that Brexit has damaged Britain’s international reputation and some candidates might be deterred by the turmoil. Carney’s term has certainly had its tough times, with the U.K.’s decision to leave the EU the major factor. It dragged the BOE into a political battle and saw Carney heavily criticized by some politicians for alleged anti-Brexit bias. The impact of Brexit on the economy has also forced policy makers to put on hold their plans for interest-rate increases.

Carney has delayed his exit from the BOE twice because of Brexit, though he’s said he won’t do so again and will leave at the end of January 2020. Under the current government plans, the U.K. is due to formally exit the EU in October at the latest.