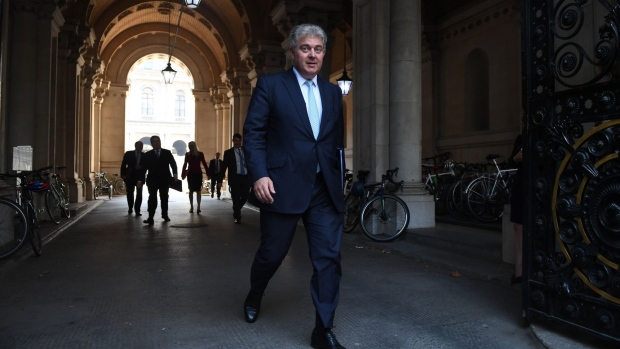 Brandon Lewis departs from a meeting of cabinet ministers in London, on Sept. 15. , Bloomberg

One the U.K.’s top legal officials defended Boris Johnson’s plans to rip up part of the Brexit divorce deal, saying they don’t breach international law -- but warned he could resign if the government tried to abuse the legislation.

Speaking in the House of Lords, Advocate General for Scotland Richard Keen contradicted Northern Ireland Secretary Brandon Lewis, who told MPs last week the draft bill would break international law in “a limited and specific way.” Keen told peers the bill is designed to deal with a “contingent situation” in which the European Union was in breach of its treaty obligations.

“The provisions of the bill are entirely limited in their intent and effect and fall within the rule of law and the requirements of international law,” Keen said. “I certainly don’t anticipate that those provisions would be abused. Indeed, if they were, I cannot foresee that either House would contemplate passing the relevant regulations. But if they did, I would certainly have to consider my position as a law officer.”

Johnson’s plan to re-write part of the Withdrawal Agreement he signed last year has pitched the Brexit negotiations into a storm and prompted the EU to threaten legal action unless he withdraws the bill. The row also threatens to sink the fraught negotiations between the two sides over a trade deal.