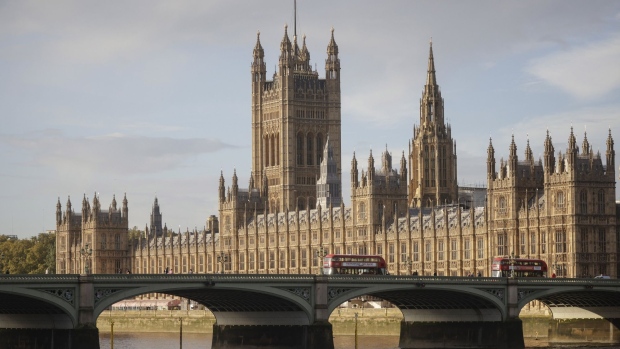 The Houses of Parliament and Westminster Bridge in London, U.K., on Monday, Oct. 25, 2021. Frances Haugen, a former Facebook product manager, is due to give evidence to U.K. lawmakers at a draft online safety bill committee hearing. Photographer: Jason Alden/Bloomberg , Bloomberg

An influential panel of U.K. lawmakers called for a crackdown on paid lobbying by members of Parliament, amid the fallout from Boris Johnson’s botched attempt to block the punishment of a former minister.

Sitting MPs should be banned from providing paid parliamentary advice, consultancy or strategy services, the Committee on Standards said on Monday in a report. In addition, lawmakers taking on outside work should have written contracts making it explicit that their duties cannot include lobbying ministers or officials, or providing advice on how to do so, it said.

The proposals -- which aren’t final -- aim to close loopholes that have enabled MPs to lobby ministers and make explicit the boundaries of outside work they are allowed to undertake.

They come a month after Johnson intervened to try to prevent Parliament’s suspension of his friend, Conservative MP Owen Paterson, over lobbying violations. His plan failed, but the ensuing U-turn came too late to prevent a slew of negative headlines and an intense backlash from Tory MPs.

A contrite Johnson later conceded to his party that he’d taken his eye off the road and effectively driven the car into a ditch.

“If approved, these robust proposals will empower the standards system in Parliament to better hold MPs who break the rules to account,” Committee Chairman Chris Bryant said in a statement.

The proposals are out for consultation, with final recommendations due in the New Year. The rules will also be subject to a vote in the House of Commons.

Separately on Monday, the Labour Party said the ministers’ code of conduct should be strengthened with the appointment of an independent watchdog.

“If you break the rules there should be clear consequences,” Deputy Labour Leader Angela Rayner said in a speech. “Our democracy cannot hinge on gentleman’s agreements -- it needs independent and robust protection from Conservative corruption.”

Johnson has said the U.K. is “not remotely a corrupt country.”