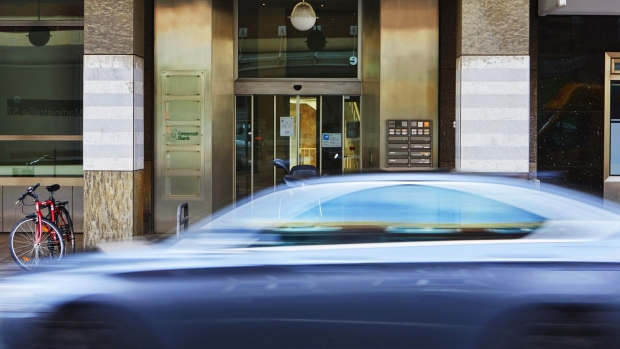 An automobile passes the Greensill Bank AG offices in Bremen, Germany, on Thursday, March 11, 2021. Germany’s financial regulator is nearing a decision to wind down Greensill Bank after its parent company filed for insolvency, opening the door for most depositors to get reimbursed. Photographer: Dominik Reipka/Bloomberg , Bloomberg

(Bloomberg) -- The U.K. allowed a top civil servant to advise Greensill Capital while he was still working for the government, documents released on Tuesday showed, as the lobbying scandal surrounding the insolvent lender took another damaging turn for the ruling Conservatives.

Bill Crothers, the then government’s chief commercial officer, joined Greensill as an adviser to its board in September 2015 -- two months before he left the civil service -- according to a letter to the Cabinet Office from Eric Pickles, chairman of the watchdog charged with approving appointments for ministers and senior bureaucrats after they leave office.

The revelation will fuel the furore surrounding Greensill and that has embroiled top ministers in Boris Johnson’s government and former Conservative Prime Minister David Cameron, who took a post with the firm after leaving office.

Amid intense media coverage, the government on Monday announced an inquiry into how Greensill secured supply chain finance contracts and how they work, and how its representatives -- including Cameron -- engaged with ministers.

Johnson said Tuesday the results should be published “quickly” and presented to Parliament.

“People have got questions that need to satisfy themselves on, including me, about how this supply chain finance stuff is meant to work,” Johnson said.

Johnson is trying to draw a line under a crisis that’s seen ministers scrutinized for their interactions with Cameron, and the Tories accused of cronyism. The probe is due to report at the end of June.

But the latest development will attract further scrutiny of the ties between business and government, and especially with Greensill, whose founder Lex Greensill developed close ties to Cameron’s 2010-2016 administration.

After leaving the civil service, Crothers was appointed a director of Greensill in Aug. 2016, a post that would have required him to seek advice under the government’s Business Appointment Rules, according to the letter from Pickles, who heads the Advisory Committee on Business Appointments.

“Mr. Crothers and the Cabinet Office have both informed ACOBA that he joined Greensill in September 2015, as an adviser to its board, whilst he was still employed as a Civil Servant,” Pickles wrote. “This was agreed by the Cabinet Office under its internal conflicts of interest policy.”

Pickles, a former Cabinet minister under Cameron, asked the Cabinet Office to publish its conflicts of interest policy and disclose what the approval process was for Crothers taking the Greensill role. He also asked if there is a register of government staff working for outside organizations, and how sensitive government information was protected.

In a separate letter to Pickles, Crothers said the initial role was approved by the Cabinet Office, and that when he left government he was told that as he was already working for Greensill, no BAR application needed to be submitted.

“My move to director in late 2016 was not a substantial change to my role, certainly given the scale and nature of the business, and had been anticipated when approved, and so I did not consider that a new BAR application was required,” Crothers said.

Greensill collapsed in March in one of the most astounding financial blow-ups of recent years. That has put thousands of jobs at risk at U.K. plants owned by Liberty Steel, part of the GFG Alliance, which relied on Greensill for financing.

The opposition Labour Party has ramped up pressure on Johnson’s government, after it emerged Cameron directly approached Chancellor of the Exchequer Rishi Sunak, Health Secretary Matt Hancock, and two junior Treasury ministers to lobby on behalf of Greensill as it sought access to government coronavirus aid programs.

On Wednesday, Labour plans to force a vote in the House of Commons to establish a special parliamentary committee to investigate Greensill, with the powers to call Cameron and Sunak in to provide evidence.

The government has said both Sunak and Hancock acted correctly. Cameron, who’s been cleared of breaking the rules on lobbying, “welcomes the inquiry and will be glad to take part,” a spokesman said Monday.