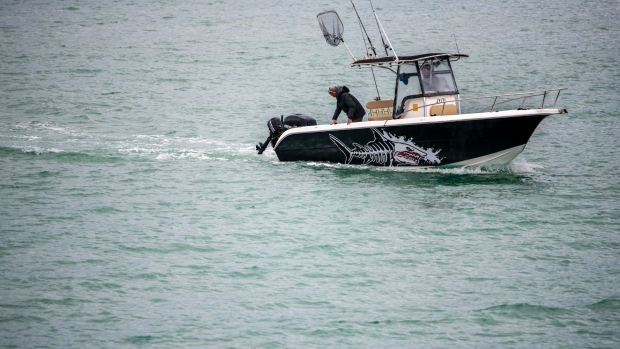 A pleasure craft with fishing equipment returns to port at St Helier, Jersey, on Sunday, May 9, 2021. France’s maritime minister suggested that her government could cut off electricity supplies to the British island of Jersey, amid a deepening row between France and the U.K. over post-Brexit fishing rights. , Bloomberg

(Bloomberg) -- The U.K. limited the access of small EU boats to fish in its territorial waters, a move that risks stirring up a bitter post-Brexit dispute.

Out of 47 applications to fish in British waters made by small vessels, 12 licenses have been granted, the U.K.’s Department for Environment, Food and Rural Affairs said in a statement. The other licenses weren’t granted because the boats weren’t able to show sufficient evidence of having fished in the waters historically, the department said.

The U.K. decision risks inflaming one of the most contentious and emotive elements of the post-Brexit relationship. Earlier this year, Britain and France deployed warships to the isle of Jersey amid protests about curtailing the ability of French boats to fish in British seas.

Fishing was one of the most hotly contested issues in the negotiations over Britain’s divorce from the EU, as countries such as Ireland, France and Spain pushed to protect jobs in their coastal communities while Britain sought to regain control of its territorial waters.

The EU has previously threatened retaliation in other areas of the post-Brexit relationship, such as financial services, if it doesn’t get its way on fish.

‘’Our approach has been reasonable and fully in line with our commitments in the Trade and Cooperation Agreement,” DEFRA said in a statement. “We continue to work with the Commission and the French authorities and will consider any further evidence provided to support the remaining license applications.”