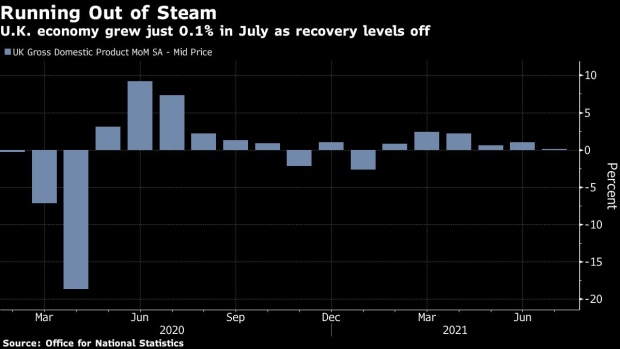 Both the pound and FTSE 100 Index have trailed market benchmarks since June, and derivatives show that bearishness is now seeping through investor consciousness. Hedge fund positioning in pound options and futures turned net short for the first time since December, when the U.K. was mired in bitter exit negotiations with the European Union.

The worry bubbling up from money managers is that inflation could force the Bank of England to raise interest rates and crunch an economy that’s already looking feeble. To investors at Allianz Global Investors and William Blair Investment Management, the U.K. looks unattractive against other options.

“Covid has been a convenient detractor from the Brexit hit,” said Mike Riddell, who manages more than $10 billion at Allianz in London.

He’s short the pound and closely watching how the economy fares when the government’s furlough payments, which supported people out of work during the pandemic, end this month. The U.K. has suffered a “nasty cocktail of a bad Covid hit and Brexit,” he said.

Market movements have been relatively subdued so far. The pound has been rangebound around $1.37 for months, and analysts see it ending the year near that level. The currency has weakened almost 3% against the dollar since June.

To John Roe, head of multi-asset funds at Legal & General Investment Management Ltd., there are a lot more risks facing the U.K. Gas and power prices are breaking records day after day, and money markets are pricing in rate hikes after inflation surged to the highest in more than nine years.

“The pound had come a long way,” said Roe. “There have been some big shocks, such as gas, plus some comments from the BOE that we think increase the chance of a policy mistake and drive up uncertainty.”

The economic picture looks increasingly grim and there’s been a steady drumbeat of negative reports. U.K. retail sales fell for a fourth month in August, the longest stretch of declines in at least 25 years.

In markets, some of the negativity is because prices have already rebounded. To some investors, the pound and U.K. stocks got too cheap in the Brexit aftermath and markets have since normalized.

Data from options prices also reflect a restrained view on the currency. Bloomberg’s model based on options pricing points to a 61% probability that it will end the year below $1.39.

“We’re not bearish yet, but it’s not a highly attractive opportunity any more,” said Thomas Clarke, who manages the Dynamic Diversified Allocation Fund at William Blair Investment Management that’s outperformed 86% of peers over the past year.

The firm reduced the bet on sterling in its main portfolio to around 2% in recent months, down from 8% in mid-2020.

The U.K.’s economy look good a few months ago when vaccines were being rolled out and businesses were reopening, “but that’s not really the case any more,” said Clarke.