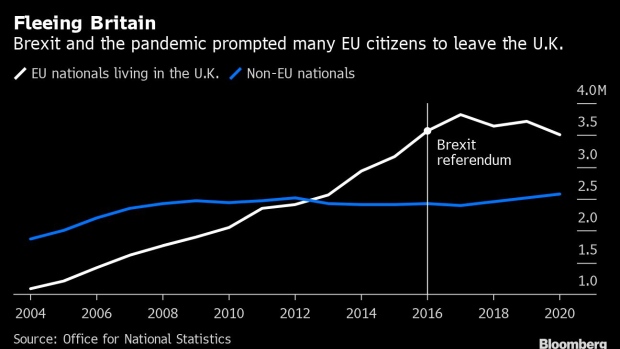 More than 200,000 European Union citizens left the U.K. last year, driven away by Brexit and the deepest economic slump in three centuries.

There were 3.5 million EU nationals living in the country compared with 3.7 million in 2019, Office for National Statistics figures published Friday show. The number of non-EU citizens was little changed at 2.6 million.

The loss helps to explain why Britain is experiencing labor shortages that are leading to empty shelves at stores, pushing up prices and threating the recovery from the pandemic recession. Sectors such as retail and hospitality rely heavily on EU workers, and it’s unclear how many of those who left the country will return.

The pandemic hit the U.K. harder than most countries, and migrants may have found attractive opportunities in their home country. Meanwhile, Britain’s exit from the EU has made it harder for foreign nationals to return to the U.K., with those who do not have settled status now requiring a visa to work, live or study.

However, the ONS said a shortage of truck drivers was not necessarily due to EU citizens going home after Brexit. While the number of EU nationals working as truck drivers fell by more than a third between mid-2020 and March this year, many could have switched to different careers, it said.

The pandemic complicated the task of tracking migration flows after face-to-face interviews at ports were suspended due to social distancing requirements. Instead, officials have had to rely on surveys carried out remotely.

Statistical modeling suggests 100,000 people emigrated from the U.K. between March and June last year when the first lockdown was imposed, a significant increase on the same period of 2018 and 2019, the ONS said. More than three quarters of them were EU nationals. At the same time, international travel curbs meant a much smaller number than usual came to the U.K.

“It’s too early to say whether these are temporary departures due to the pandemic and Brexit or the continuation of a trend which may have been emerging anyway,” the ONS said. “As we gather more data, the picture will become much clearer.” Overall, residents born abroad made up 14% of the U.K. population, which was estimated at around 67 million after negligible growth over the year.

London remained the area with the largest proportion of non-U.K.-born residents. Foreign citizens accounted for 9% of the total population, with nationals of Poland, Romania, Ireland, India and Italy taking the top five slots.