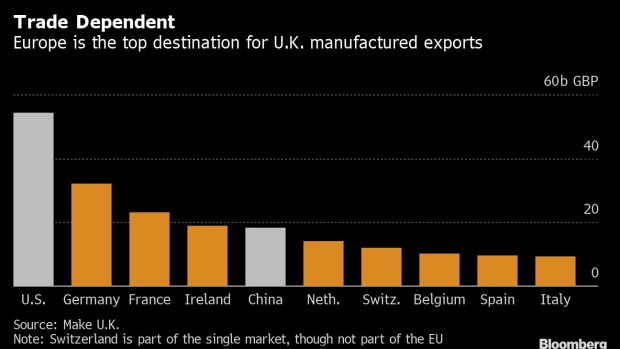 (Bloomberg) -- U.K. manufacturers renewed their call for an exit deal with the European Union, backing it up with fresh data highlighting Britain’s reliance on trade with its closest neighbors.

Make U.K. found that eight of the top ten markets for British-made products are in Europe. Exports to the top six European destinations, which include Germany, France and the Netherlands, were worth 117.4 billion pounds ($152.6 billion.)

“These figures lay bare the overwhelming importance for manufacturers of trade with our closest market and the need to avoid imposing any barriers which will make this more difficult,” Make U.K. head Stephen Phipson said in a statement on Thursday. “For U.K. manufacturers, access to their biggest market must be a premium.”

The British government has upped its rhetoric on Brexit in recent days, with Prime Minister Boris Johnson planning to break international law and re-write the divorce deal agreed with the bloc. A transition accord agreed to last year is set to end on Dec. 31, meaning time is running out to avoid a ‘no deal’ scenario and leave businesses with tariff barriers. That would also put thousands of high-paying jobs at risk.

The manufacturing sector has already been hit hard by the coronavirus pandemic, with companies like Rolls-Royce Holdings Plc planning wide-ranging job cuts and moving some production overseas. The sector has called for targeted support such as extending the government-sponsored worker-furlough plan to get through the downturn.

Make U.K.’s report found the country was the ninth leading manufacturer globally and 10th in terms of global exports, with output amounting to 191 billion pounds in 2019. The data was compiled before the pandemic.