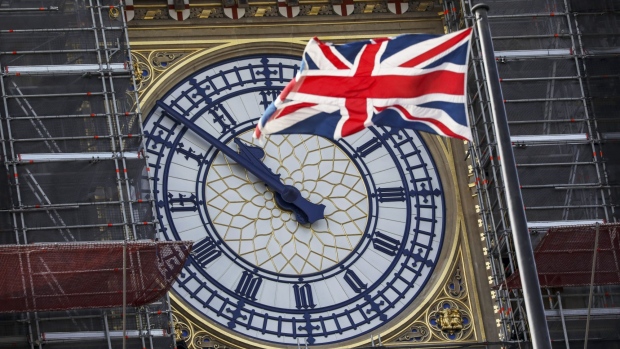 FILE: A British Union flag, also known as a Union Jack, flies in front of the clock face on the Elizabeth Tower, also known as Big Ben, of the Houses of Parliament in the Westminster district of London, U.K., on Wednesday, Aug. 28, 2019. European Union and Jack flags as Brexit trade talks that were on the verge of a breakthrough descended into a fight between the U.K. and France on Thursday as the British government said prospects of an imminent deal had receded. Photographer: Simon Dawson/Bloomberg , Bloomberg

(Bloomberg) -- The U.K. could need tax increases of about 60 billion pounds ($84 billion) if Chancellor of the Exchequer Rishi Sunak wants to balance the books, according to the Institute for Fiscal Studies.

The warning sets the tone for the Treasury’s budget on March 3, when Sunak is due to outline how he intends to address the ruinous legacy of a pandemic that has driven government borrowing to its highest in peacetime and forced him to deliver 13 emergency statements since he took office a year ago.

“It is possible that growth will be fast enough that big fiscal deficits will largely dissipate of their own accord,” said Paul Johnson, director of the IFS. “But that is not a central expectation. More likely, we are on track for ongoing unsustainable deficits. A reckoning in the form of big future tax rises is highly likely, but not as yet inevitable.”

The analysis, based on forecasts by Citigroup, indicates the scarring left by the deepest slump in three centuries may be worse than the Office for Budget Responsibility predicted in November. However, the IFS said now is not the time to be trying to fix the public finances, urging Sunak to bolster the recovery first.

The report published Tuesday conceded that the outlook now is not much clearer than it was in November. A central scenario would see Britain still borrowing about 130 billion pounds by the middle of the decade, 30% more than the OBR forecast. That could rise to as much 190 billion pounds under a pessimistic scenario. If the economy manages to emerge with little sustained damage, the deficit would fall to pre-pandemic levels of around 50 billion pounds.

Britain has suffered both one of the world’s worst health crises per capita, with more than 4 million Covid-19 infections and almost 122,000 people dead, and also one of the poorest economic outcomes.

The government is set to borrow 400 billion pounds -- around a fifth of the size of the economy -- in the current fiscal year. A debt burden of over 2 trillion pounds is manageable now because interest rates are at a historic low, though the IFS warned that the Treasury is vulnerable if those rates rise.

Ministers are faced with the task of economic rebuilding at the same time it has embraced two bigger generational challenges: Brexit and commitments to zero out net fossil-fuel pollution by the middle of the century.

Sunak “needs to strike a balance between continuing support for jobs and businesses harmed by lockdowns, and weaning the economy off blanket support,” Johnson of the IFS said. “Any significant continuation of the furlough scheme must be limited and carefully targeted.”