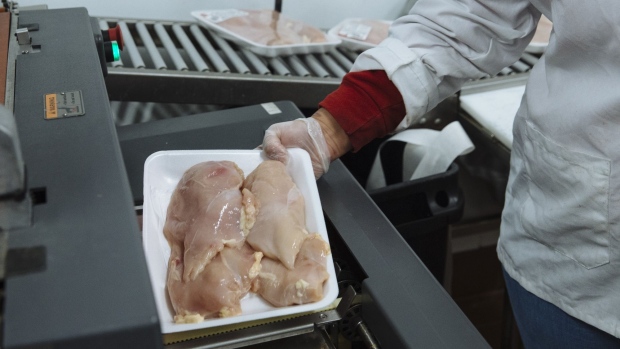 A worker places chicken breasts in a machine to be weighed and packaged in the butcher section of a Stew Leonard's supermarket in Paramus, New Jersey, U.S., on Tuesday, May 12, 2020. Stew Leonard Jr. said that meat packing plant the company uses is operating at about 70 percent capacity, and he expects it to rebound to full capacity in about a month, CT Post reported. Photographer: Angus Mordant/Bloomberg , Bloomberg

(Bloomberg) -- U.K. food and drink makers could run out of carbon dioxide within two weeks in the wake of an energy crunch, with meat production particularly vulnerable, an industry group warned.

Soaring energy prices have forced two European fertilizer makers to halt some output in recent days, threatening shortages of CO2 -- a byproduct of producing the nutrients. Chicken and pig plants rely on the gas to stun animals at slaughterhouses and beverage makers use it to give soda and beer its fizz.

A lack of CO2 will cause “massive disruption” to food supplies within 14 days, the British Meat Processors Association said Friday. Meat companies may have to shutter production lines, leaving farms crammed with extra animals. Already this year, livestock plants have cut output due to worker shortages, while consumers have faced bare grocery store shelves amid a lack of truckers.

“It’s plunged the industry into chaos,” Nick Allen, head of the meat group, said in a statement about the CO2 risk, adding that pig farmers were already facing the “imminent prospect” of culling animals.