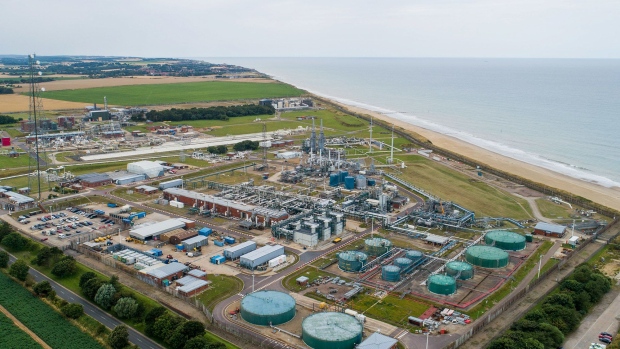 The Bacton Gas Terminals in Bacton, U.K., on Tuesday, Aug. 3, 2021. The key U.K. energy hub could become a major hydrogen producer in the coming decades, potentially supplying London and helping the nation meet its clean-energy targets, according to a report from the countrys oil and gas regulator. , Photographer: Bloomberg/Bloomberg

“People should be confident that the supplies will be there, and that we will be protecting them in terms of price rises,” Sharma said on “Trevor Philipps on Sunday.” “But of course we’re not complacent about this.”

Top U.K. officials are in emergency talks that will continue into Monday, led by Business Secretary Kwasi Kwarteng.

Kwarteng met Saturday with senior executives from energy companies and regulators to discuss the jump in gas prices that’s threatened to shut suppliers and disrupt industries from fertilizer to meat.

He was due to meet with the U.K. energy regular Ofgem on Sunday and hold further talks with executives on Monday to plan a way forward.

Europe’s energy crisis has helped push natural gas prices to records in the U.K. The squeeze in supplies and the jump in prices has forced at least five U.K. providers to shut.

The executives assured Kwarteng there was no threat to supplies as the country moves into the colder winter months.

“Ofgem has robust measures in place to ensure that customers do not need to worry, their needs are met, and their gas and electricity supply will continue uninterrupted if a supplier fails,” the government said in a statement.

Natural gas is crucial to power generation for homes and industry and for heating in winter, with more than 22 million households connected to the grid in 2020.

Bills will go up for 11 million households from Oct. 1, pressuring an inflation rate that has unexpectedly accelerated above the Bank of England’s 2% target.