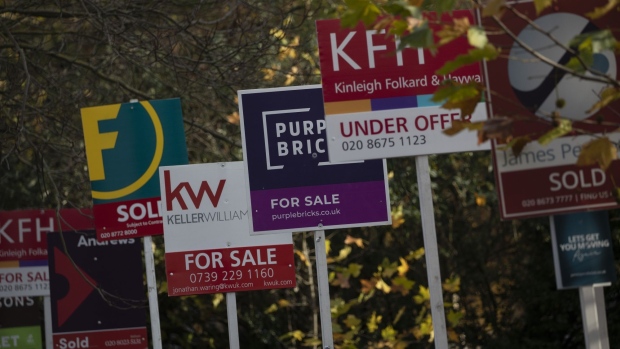 For sale and sold signs for estate agents outside residential flats in the Balham district of London, U.K., on Tuesday, Nov. 24, 2020. Asking prices for U.K. homes slipped this month as owners sought to get sales agreed in time to benefit from a temporary tax cut. Photographer: Simon Dawson/Bloomberg , Bloomberg

(Bloomberg) -- U.K. mortgage approvals dipped in January as the end of a tax cut on property purchases approached.Banks and building societies approved 98,994 loans, down from 102,809 in December, the Bank of England said Monday. Consumers continued to repay debt in the absence of opportunities to spend.A stamp-duty holiday saving buyers as much as 15,000 pounds ($21,000), which galvanized the housing market last year despite the worst economic slump for 300 years, is due to expire at the end of March. Buyers still looking at the start had little chance of meeting the deadline.However, Prime Minister Boris Johnson’s announcement last month of gradual lifting of coronavirus restrictions plus speculation that Chancellor Rishi Sunak is set to extend stamp duty relief in his budget on March 3 appears to have injected renewed vigor into the property market.Property website Rightmove recorded its busiest ever day on Feb. 17 amid renewed optimism about the outlook.

Consumers repaid 2.39 billion pounds of personal debt in January, almost all of it amassed on credit cards. The reduction was the most since May, as England’s third coronavirus lockdown led to a further 18.5 billion pounds building up in bank accounts.

Separate figures showed input cost inflation for U.K. factories accelerated to its highest rate in over four years in February amid supply chain disruption and raw material shortages. IHS Markit said manufacturing output expanded at its weakest pace in nine months and the purchasing managers index for the sector rose to 55.1, slightly above the flash estimate of 54.9.